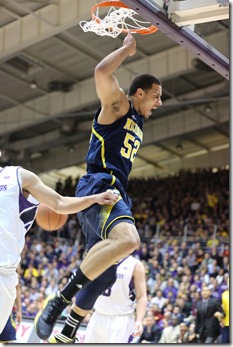 In its first two Big ten games, Michigan is dealing with the two extremes of the tempo spectrum: Northwestern, at 64 possessions per game, plays at a slow pace typical of a team running the Princeton offense. Iowa, at just over 70 possessions per game, is the fastest team in the Big Ten and likes to push the ball upcourt for quick shots.

John Beilein addressed the stark difference in styles during a press conference in Saturday.

“When you’re getting ready to play Northwestern, it’s very difficult prep, it’s incredible, and any other team that follows up, you have to scrap everything because it’s going to be different again,” Beilein said. “So, in the two days of turnaround, you have to go back to some other things that we emphasize, to go back to play Iowa.”

The Hawkeyes played their first Big Ten game at home against Indiana, and while at first glance the score may indicate a slower pace, don’t be fooled — Iowa racked up 78 possessions but simply couldn’t shoot or score, registering an effective field goal percentage of just 38 percent.

Michigan generally hovers more around a Northwestern-style pace, but has shown its ability to get out and run when it has to. Beilein said his team will play at whatever tempo it needs to.

“I’m not sure what the tempo will be. We sort of morph to whatever the tempo needs to be,” Beilein said. “They score points, and they scored a lot on us last year … and they didn’t even shoot it well last year. We’ve got to be ready to guard in full-court, guard them in transition.

“If we have to sit down and guard for 34 seconds, we’ll do that. If we have to run, we need to slow the pace, whatever we got to do. That’s what I envision the great teams can do. They can adapt.”

Early in the game against northwestern, Mitch McGary felt the basketball slip out of his hands after a rebound. It fell to the ground and began to roll out of bounds.

Naturally, so did McGary.

The freshman big man is known for his heart and effort, and those two attributes have generally served him well. On that particular play, however, all they got him was floor-burned hands. When asked about the play, McGary admitted his hands are still a little worse for wear.

“I’ve got a couple blisters,” McGary said. “But that’s what it’s all about, diving on the floor.”

While hustle is one area McGary does not need any work in, he has been learning his way through almost every other aspect of the game, especially when it comes to being a post player in Beilein’s system. A few times against Northwestern, McGary’s lack of discipline with the ball in his hands under the basket was exposed and he was stripped.

Beilein alluded to being able to “play big” as an area the coaches are particularly focused on. This means keeping his elbows above his head when he has the ball, as well as making sure his feet are positioned so that he can achieve balance on the court and put himself in position to pass or go back up.

“Catching the ball and just putting it in rather than trying to do too much with the ball,” Beilein said. “Just footwork, balance, all those things. When he does have issues, it’s probably because he’s trying to go too fast and do too much.”

One player McGary is thankful to have in his ear is his front-court mate, Jordan Morgan. McGary said the redshirt junior has helped him a lot in getting him acclimated to college ball and making sure he stays on the right track.

“He’s been a big help. He’s taken me under his wing, like a big brother. He’s shown me all the footwork, all the plays, where to be and all that stuff,” McGary said. “He’s a senior but junior, eligibility-wise and he knows the system in and out and he’s been helping me really well.”

Morgan learns his lesson after technical

Along with mentoring McGary, Jordan Morgan learned he needed to keep tabs on his own emotions after being rung up with an unflattering technical foul against Northwestern.

“It was a heat-of-the-moment, lapse of judgment type deal,” Morgan said. “I can’t let adversity get to me like that.”

As punishment, Morgan had to run a track drill in practice — essentially a conditioning test. Morgan completed the drill easily, but he wasn’t always able to do that.

For both Beilein and Morgan, that moment was just another indication of how far the Detroit native has come throughout his four years with the program.

“Certainly there was no one thinking he was going to be a four-year starter here when he first came here. That is a lot to do with him. He’s had a really good mindset,” Beilein said. “He’s had opportunities that others might not get, because we had no big men when he got here. And he did get the redshirt and grew, and we’re really proud of him.”

The drill is made up of three endurance-related tasks, to be completed in a prescribed amount of time. When Morgan arrived on campus as a freshman, he couldn’t do even one in time. Now, he does all three easily.

“I guess it’s just development as a player and my conditioning levels, physically,” Morgan said.