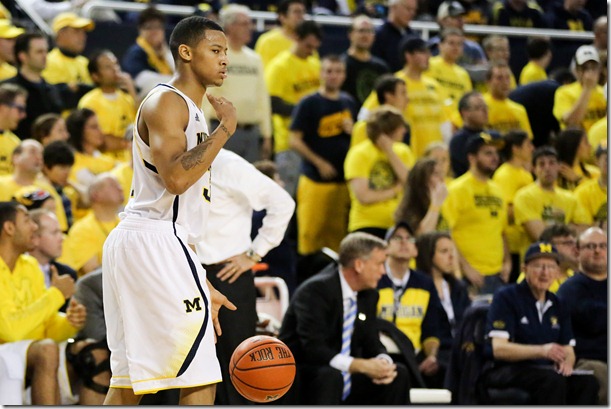 Iowa came to Ann Arbor and landed the first punch. The Hawkeyes opened the game on a 7-0 run and looked like a team ready to give Michigan a fight but the Wolverines shouldered the early blow and responded with gusto. Michigan battled back and forth with the Hawkeyes for much of the first half before delivering a swift knockout blow. The Wolverine offense rounded into form and a Mitch McGary block provided energy as the Wolverines closed the half on a 18-8 run. Iowa couldn’t ask to play much better in the first half, but almost inexplicably found itself trailing by 11 points at the break.

The Hawkeyes were broken at halftime and Michigan finished them. The second half was more of an offensive showcase than a competitive basketball game. The Wolverines outscored the Hawkeyes 72-36 over a 23 minute period that began with seven minutes to play in the first half and ended when Michigan’s starters were removed from the game with four minutes to play. (Yes, that’s a 125 point per 40-minute pace.) The Wolverine offense evolved into a contest of showmanship and one-upmanship as Michigan players exchanged step-back jumpers, alley-oops, fancy passes and three pointers throughout the final 20 minutes.

Michigan’s offense scored 95 points on 67 possessions for the game. That’s an impressive 1.42 points per trip, the Wolverines’ best output of the 2012-13 season, but what’s truly remarkable is that Michigan was so efficient despite scoring just two points on its first seven possessions of the game.  Michigan shot the ball extraordinarily well — 65% on twos, 46% on threes for a 66% effective field goal percentage – but such stellar shooting nights have almost lost their luster due to their regularity. Despite the fun-and-gun style of the second half, the Wolverines kept their discipline, turning the ball over on just 9% of their possessions. A turnover rate under 10% is impressive for a senior-laden team, it’s incredible in a game where over 55% of Michigan’s minutes were given to freshman.

Iowa managed one point per possession on the nose offensively but much of that production came in garbage time (the game was statistically finished with over 6 minutes to play). Once again Michigan’s offense was so dominant that the defensive end of the floor was merely an afterthought. Iowa shot 48% on twos and 35% on threes for a 49% effective field goal percentage right around its season average. As it has done all season, the Michigan defense dominated the defensive glass and rebounded 84% of Iowa’s misses on the night. Iowa valued the basketball well (10% turnover rate) but Michigan did a great job of preventing the Hawkeyes from getting to the charity stripe where they’ve made hay all season. Defensively, Michigan’s Achilles’ heel continues to be isolation situations on the block. At this point, that flaw has been manageable given that the Wolverines haven’t faced many dominant big men and do such a great job of rebounding the shots that are missed.

The show goes on. Michigan will play tougher games but the Wolverines are playing arguably the best basketball in the country. The Wolverines already ranked 1st nationally in offensive efficiency and managed to play an even better offensive game than we’ve seen yet. Northwestern and Iowa are far from the class of the conference but scoring 189 points on 136 possessions (1.39 PPP) in league play is an awe-inspiring statistic. Just a year ago Michigan averaged 1.06 points per trip in league games and its best conference performance was 1.19 PPP at Penn State.

Fifteen games into an undefeated season, Michigan is still improving with every performance as the ceiling seems to rise daily. Next up is a home game against Nebraska (Wednesday, 7 p.m.), fresh off of a 47-41 home loss to Wisconsin, and an opportunity to tie the best start in program history.