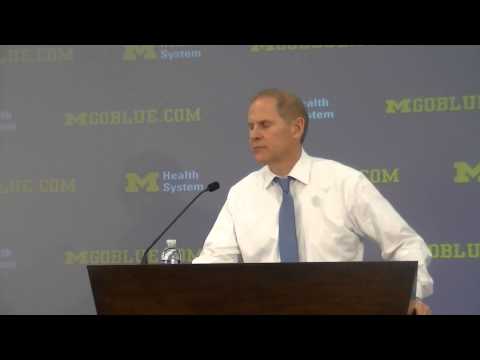 John Beilein faced the media after another 28 point win in Big Ten play. Beilein discussed what went right in the game and a number of Michigan’s standout performers. Watch Beilein in the embedded media player below or find notes and quotes after the jump.


“I think in the first probably 15 minutes, you saw two really strong teams really battling it out and trying to find themselves. Once you hit the speed and the physical play of the Big Ten, it was a very competitive game. Between defense and offense we had to realize where we were against Iowa. I really like their team. They’ve just had an unfortunate start playing Indiana and Michigan on a night like this, back-to-back to start your games. I don’t know too many teams that wouldn’t be 0-and-2 in that situation. I like their team, I think it’s going to be really good down the line. But I like our team, too. We did some really good things out there. We needed that. We’ve been in a lot of games where, in the first 15 minutes we might’ve had a double-digit lead and we didn’t have that today. We closed well, then we came out in the second half and really played good from the get-go. Love that focus, that energy and that determination that you need to have.”