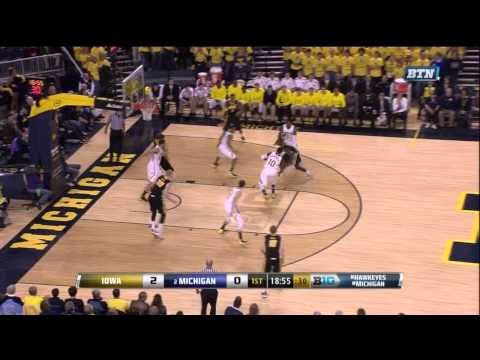 For the majority of the first half, it looked as though Iowa was going to give Michigan a game. It started with the Hawkeyes finding open looks inside against Michigan’s defense. The Wolverines had some trouble with defensive positioning early on, and Iowa got away with running some of the same action Michigan has run this season. First there was the pick-and-roll from Anthony Clemmons to Aaron White; Nik Stauskas was held up by the off-ball screen from White, which led to Glenn Robinson III leaving white and helping on Clemmons. Robinson actually does a pretty good job recovering, but Clemmons makes a nice dish to White, who finishes strong at the cup. Iowa’s next basket came in transition, with White positioning himself on the baseline similar to how Robinson does when Michigan has the ball. White receives the pass on the baseline from Clemmons while Michigan’s defense is still recovering and White winds up with a wide-open dunk. On the 3-pointer, Tim Hardaway Jr. gets caught helping where he probably didn’t need to — Aaron White is probably not quicker than Nik Stauskas, and Jordan Morgan was already in a position to help in the post — and leaves Roy Devyn Marble open for the long-range bomb. Michigan’s defense held Iowa to around its average effective field goal percentage, but at the start of the game the Hawkeyes were getting baskets the Wolverines haven’t been surrendering much this season.

It may sound strange to say this about a five-point performance, but this was a breakout game for Mitch McGary. The freshman had struggled a bit in his previous two games and looked like he was having trouble figuring out his role in the offense. The great thing about McGary’s place within Michigan’s team is that the Wolverines don’t necessarily need him to score a lot of points. Michigan usually has four players on the court capable of scoring points in bunches. The Wolverines need McGary to do exactly what he did against Iowa: be a defensive force in the post, grab every rebound in sight and run the floor. In 20 minutes, McGary had 11 rebounds and three blocks, including the block that kicked off Michigan’s offensive explosion late in the first half. The transition to the college game has been slightly rockier for McGary than his classmates, but John Beilein has stressed that McGary’s goal should be to “hit singles” while he’s in the game. By hitting singles, Beilein means focusing on little things like positioning and balance before thinking about offensive production. On his block of Aaron White, we can see how McGary has grown in his overall awareness on defense. The Chesterton native was guarding Iowa’s center Adam Woodbury, but kept his eye on the ball throughout the possession and found himself in perfect position to reject White’s dunk. It’s clear that McGary’s teammates feed off his energy, and that block was particularly effective: directly following that play, Michigan went on a 15-6 run the remainder of the half.

3) Michigan ends the first half with a bang

The Michigan offense looked a bit sluggish early in the first half, at least by its high standards, the Wolverines decided to turn it on with about three minutes to play until the break. What allows Michigan to go on runs like the one they went on at the end of the first half is the myriad of ways they can score. Usually, players one through four on the court can shoot from deep, Trey Burke can get any shot he wants out of a half-court set and the Wolverines run the fast break extremely well. Iowa experienced the Hydra-like nature of Michigan’s offensive attack firsthand: the Hawkeyes attempted to cut off Trey Burke’s scoring ability by denying him the ball, but other scoring options kept stepping up. On the first play of this sequence, Nik Stauskas receives a pass from Glenn Robinson III on the perimeter, and subsequently shows just how little space he needs to launch a 3-pointer. Robinson simply steps between Stauskas and his defender and the young Canuck buries it from deep. The other two plays further highlight Mitch McGary’s versatility and dominance of the defensive glass. He makes the dunk by Tim Hardaway Jr. in transition possible by first securing a tough rebound in traffic, keeping the ball high (that “playing big” thing John Beilein keeps harping on him about) and shooting the outlet pass to Trey Burke, who is in position to cross half-court in under three dribbles. On the final play of the half, McGary shows off his handle. He corrals the defensive rebound with about four seconds left and finds Robinson streaking to the basket. Robinson’s length and quickness allow him to get the layup off before the buzzer. This late run turned out to be Michigan’s effective knockout punch — Iowa never recovered.

Nik Stauskas is known for his 3-point shooting — shooting 54 percent, rightfully so — but all season the freshman has been showing Michigan fans that he is a complete offensive weapon. At 6-foot-6 and with a quick release, he can get his shot off against nearly anyone; with his quickness and handle, he can get by slower defenders preoccupied with his 3-point shooting. He exhibited his ability to do the latter in the second half against Iowa. Stauskas took full advantage of the clear match-up problem when he found that the Hawkeyes’ 6-foot-1 point guard Mike Gesell was guarding him on the perimeter. When Gesell attempted to cheat right on the screen from Jordan Morgan, Stauskas took the ball to the left, timed his jump perfectly for the dunk and Gesell just got out of the way. On the very next possession, Stauskas finds himself again guarded by Gesell and again takes advantage. In fact, the entire play is eerily similar to the one before. Stauskas gets a screen from Jordan Morgan; Gesell tries to jump the screen; Stauskas reads it and takes the ball left. This time, Stauskas performs an acrobatic spin move to lose Gesell and lays it in easily. While these two plays certainly showcase Stauskas’s all-around game, what they really show is his basketball IQ. Both times, Stauskas read his defender correctly and was decisive with where he wanted to go with the ball.

We couldn’t have a Five Key Plays feature without touching on the continued excellence of Trey Burke. Burke notched a career-high in assists on Sunday with 12, and he had some pretty ones in the second half. One thing Burke does extremely well is find players open on the perimeter. Proper floor spacing is one of the tenets of Beilein’s offense and it’s a focus because it spreads the defense and creates open jump shots along the perimeter. On Burke’s pass to Tim Hardaway Jr. during the first play of the sequence, we can see that Hardaway is in an awkward spot for the defense, which was a zone. There was a man on Burke and a man watching Stauskas in the corner, but at the free-throw line extended, Hardaway was all alone. Burke recognized this immediately and got him the ball at waist height, which allowed him to fire quickly. Often point guards don’t get as much credit for assists on 3-pointers as they do for finding players around the rim, but Michigan has so many threats from deep that finding open shooters is a big part of Burke’s assist game. Little things like where these passes are placed relative to the shooter’s body are critical, and Burke has it down to a science. But Burke was showing off his entire passing arsenal on Sunday, finding Robinson for one of his two alley-oops in the second play of the sequence.  On the fast break, Burke has the ability to time his passes perfectly and fit them into the smallest holes in the defense — he finds Hardaway in the midst of three Hawkeye defenders for the bucket on the next play. All of these passes are impressive, but one of the most impressive aspects of Burke’s performance remains his efficiency: he had just one turnover against Iowa.