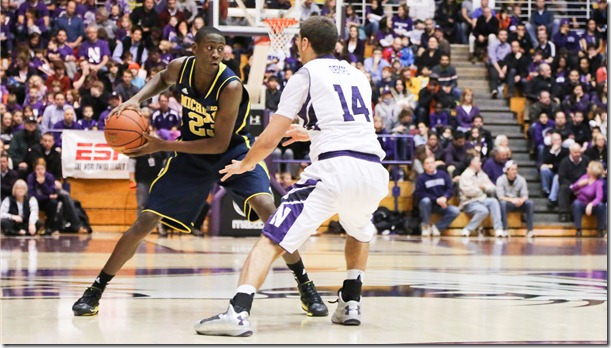 Before Michigan’s trip to Peoria, Illinois in early December, Caris LeVert looked as though he was headed for a redshirt freshman season. A little over a month later, the Pickerington, OH native is the most-used Michigan bench player outside of Mitch McGary. With every opportunity, LeVert seems to improve. He’s become steadily more efficient on the offensive end of the floor and even started a game against Central Michigan to replace an injured Tim Hardaway Jr.

It’s been a wild month for LeVert, but one of the factors that made it easier for the Michigan coaches to give LeVert a larger role in the rotation was the growth of LeVert himself. The freshman has put on around 20 pounds and grown about an inch and a half since he set foot on campus at 6-foot-4, 165-pounds.

John Beilein said he has been urging LeVert to take the training table as seriously as the weight room.

“It’s really good,” Beilein said when asked if he was pleased with the 20 pounds LeVert has already gained. “He needs another 20. That’s what he’ll be working at. I told him at training table, ‘Would you ever go to the weight room and do a couple curls and have a drink of water and get out of there?’ Well, if you go to training table and you have one piece of meat and one green bean, it’s the same deal. This is your training table. You need to treat it like a fitness center to get stronger.”

Beilein also said he’s seen an immediate impact in the way LeVert goes to the basket.

“I think that weight room helps people go to the basket a great deal,” Beilein said. “They just feel more confident, it doesn’t hurt as much when there’s physical contact.

For his part, LeVert said he hadn’t trained much at all while in high school. Outside push-ups and sit-ups, he didn’t have a weight-training regimen to speak of.

Naturally, when he tells his family about all the weight he’s gained and how much he’s grown, they have a hard time believing it.

“It is actually pretty crazy,” LeVert said. “Sometimes I tell my family and they don’t even believe me, really. It’s really fun, though.”

LeVert said at first it was difficult to acclimate to the intense weightlifting program required at Michigan, saying “It hurt every time I walked up the stairs.” But the increased role in the offense has made the work worth it.

“I’m getting a lot more comfortable out there on offense,” LeVert said. “Tim and Trey are doing a great job of just letting me know where to go offensively and I’m just trying to knock down open shots for them.”

Michigan’s preparation for its Big Ten games to this point has been a bit like being stuck in rush-hour traffic — stop, start, then stop again. While the actual games Michigan has played, against Northwestern and Iowa, have both seen a moderate amount of possessions — both teams logged around 68 in each contest — the preparation that went into each game was a different story. For Northwestern, Michigan prepared for a slow game against Bill Carmody’s Princeton-style half-court sets. To prepare against Iowa, Michigan anticipated running the floor and scoring in transition.

In preparing for their next opponent, Nebraska, the Wolverines find themselves slowing the game down once again. John Beilein said it’s been a bit of a whirlwind for younger players not used to the diversity of styles of college teams.

“The young men, I’m sure when they’re in high school and in prep school they’re not seeing this diversity,” Beilein said. “This is probably the most diversity I’ve seen in this league since I’ve been here. We have to adjust again to a different team.”

Nebraska will almost certainly try to slow Wednesday’s game down to a crawl. The Huskers average about 63 possessions per game and recently barely lost to Wisconsin in a 57 possession defensive showdown, 47-41.

Michigan will try to push the ball and dictate a faster pace than Nebraska is used to. While Michigan’s averages just a couple more possession per game than the Huskers, the Wolverines have had tremendous success when they run the floor.

“We want to get it down there. That’s the best time to attack people, is in transition. As long as you value your possession – I thought we ran really well with only six turnovers (against Iowa),” Beilein said. “That’s the downside, you have more possessions you could have more turnovers, the more you run the more careless you could be.”

According to Synergy Sports, Beilein is right — Michigan scores at a higher rate in transition than in its half court sets. The Wolverines average a scorching 1.28 points in full court situations. Their average of just 1.02 points per possession in the half court isn’t bad, but it makes it clear that Michigan should be pushing the ball whenever possible.

Beilein said that even though teams like Nebraska may try to limit Michigan’s transition opportunities, it’s still possible for the Wolverines to run.

“We still want to run all the time,” Beilein said. “Certainly if people put five guys back, that’s a little harder to run on, but you can still run on it.”

Jon Horford could play against Nebraska

John Beilein said Jon Horford has progressed enough in his recovery from the dislocated knee cap he incurred against West Virginia to go full-court in practice to day, the first time he’s been able to do so.

Max Bielfeldt has been filling in for the injured Horford. He scored five points and grabbed three rebounds in his first two Big Ten games.

When asked if Horford would be ready to play against Nebraska, Beilein replied, “He could be, yes.”