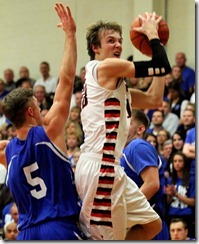 Our weekly look at how Michigan recruiting commitments and targets fared across the country including statistics, videos and photos. We’ve also refreshed our Class of 2014 Recruiting Board.

Irvin had 22 points in a 60-38 blowout win over Harrison. He followed that up with a game high 23 points in just three quarters the very next night with a 70-44 victory over Muncie Central.

Here’s a scouting report from Indiana Recruiting Guide from Irvin’s performance against Muncie:

I just love watching him play. He is the best Senior in the state and I don’t think it is even that close. At 6’7”, he can shoot the lights out, handle the ball well, and really gets after it defensively. I really don’t see how he isn’t ranked higher by some national scouting service. He is the total package. Will be great at Michigan.

“He is fundamental with both hands,” Harrison senior Mark Huston said of Irvin. “The best you can do is try and contest (his shot) to the best of your abilities and hope he misses. But he is a great talent, and he doesn’t do that a lot.”

Walton had 17 points in a 40 point win over Michigan Collegiate.

Donnal had 14 points and 16 rebounds in a 58-52 win over Bowling Green and Wisconsin bound big man Vitto Brown.

Hatch still hasn’t returned to game action but was in attendance for Michigan’s win over Iowa.

Moss Point was idle over the week.

Edwards didn’t make it up to Ann Arbor for his originally scheduled visit. Edwards had 17 points, nine rebounds and a block in a 65-60 win over Hamilton to stretch Middleton’s winning streak to four games.

Turner had a team-high 18 points in an 11 point loss to University of Detroit Jesuit.

John Beilein was in attendance on Saturday at Walled Lake Western to watch Jaksic play. Northwestern recently offered the versatile big man ($). HE had nine points and 11 rebounds in a victory over Walled Lake Northern in front of the Michigan head coach.

Here are some early season highlights of Jaksic in action:

Doyle remained sidelined with a stress fracture in his foot but could be back by the end of the month.

Chatman remained sidelined with a transfer eligibility issue and isn’t expected back until March 16th, 2013.

Wideman had 14 points including game winning free throws with .3 seconds left to give Lake Central a 64-63 win over Michigan City.

Fowler was at Michigan’s win over Iowa on Sunday. He had 10 points and eight rebounds in a 62-40 win over Hughes.

Coleman had 5 points in an 82-68 win over Indianapolis Northwest and 25 points in a 78-48 win at Lafayette Central Catholic.

Edwards was idle over the last week.

Barefield’s Corona Centennial squad was idle over the last week.

Lake Forest was idle over the last week.

St. Joseph was idle over the last week.

Winston had 21 points in an 11 point win over De La Salle. Here are some early season highlights of the talented 2016 guard: