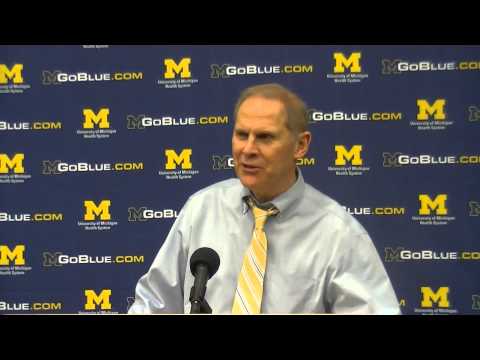 John Beilein spoke with the media during his post-game press conference after his team’s 62-47 win over Nebraska. Beilein addressed the slow pace of the game, how the experience will help Michigan moving forward and how it feels to be 16-0, tying the best start in Michigan history. Beilein also said Jon Horford could have played, and he may play on Sunday if he does well in practice. You can watch the full presser using the embedded media player below or read selected notes and quotes after the jump.


Opening Statement: “You may not believe this, but I thought that was a great win. We told our team there are so many things that stats will tell you that would back up my statement, if you coached long, and knew what the young men went through tonight. We talked to them all about it. You’re going to have games where you can’t make a shot, you can’t make a foul shot, the ball bounces the other team’s way, they get a hot shooter — (Ray) Gallegos was terrific at keeping them in the game — and you still find a way to win. Vall (Jordan) told me we had about 48 percent of our shots missed, we got offensive rebounds on them, we only had a few turnovers, we got to the foul line and got in the bonus early, and we didn’t give up too many easy baskets in the second half. We played really good defense — they shot 33 percent. They went to the foul line six or seven times. Believe it or not, as coaches, we love these types of wins. You don’t necessarily love coaching them, but when you look back at them, these are the ones that build teams. It lends credence right away to what we preach. I thought Nebraska did a great job of shortening the game. They had a really quick, athletic team that plays very solid man defense and made us do some things we haven’t seen this year. We’ll learn from it. So, good win. 3-0 in the Big Ten, let’s keep it going.”