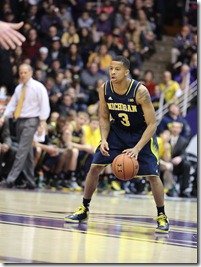 Early Brackets: ESPN, CBS & SI– Michigan is a No. 1 seed in the Midwest region in all three brackets updated this week.

Fab Fiver Jalen Rose impressed with current crop of Wolverines | The Detroit News – “”I’m really excited about the team, I like the team and I’ll be shocked if they don’t make it to the Final Four. I’m pretty sure that at this point of the season, if any Michigan team has been undefeated so far, it’s been a remarkable feat.”

Jay Bilas and Chad Ford – Top five underrated players in college basketball – ESPN – Jay Bilas: “Glenn Robinson III: The Big Dog’s pup, Robinson III is super athletic, runs the lanes on the break and can really finish. Better yet, he is just scratching the surface of how good he can be. Robinson III can get to the rim both as a finisher and as a wing rebounder. He has had to play all over the floor for Michigan, and some of his minutes have been as an undersized 4. Robinson III will refine his shot and his handle, but he already has all of the skill level, talent and athletic tools. At just 18 years old, Robinson has a long way to go, but don’t be surprised as you see him rising as a prospect.”

Nik Stauskas Credits Family & Team For Making Him a Top Shooter in America – northpolehoops.com – ““Not only does [Burke] draw a lot of attention and get me open looks, but I also get to see first hand how hard you have to work to be one of the best players in America. Seeing him in practice every day makes me realize how much harder I have to work if I want to get to his level,” he continued.”

Breaking down odds that Duke, Arizona, Michigan and Wyoming will remain unbeaten —  ESPN – Ken Pomeroy: “Michigan is in the opposite situation of Arizona. The Wolverines are more of a long shot to be the last unbeaten, but closer to a sure thing to avoid being the first to go down. They host Nebraska tonight in what figures to be an easy win. Then they don’t play again until Sunday when they travel to Ohio State. By that point, chances are high that either Wyoming or Arizona will have lost. Working against Michigan’s chance to be the last unbeaten is not just the difficulty of the Big Ten, but that its conference schedule is frontloaded with tough matchups. Road games against the Buckeyes, Minnesota, Illinois and Indiana all occur by Feb. 2. If Michigan can somehow sweep that group, there would be a very strong case that this team is better than the “Fab Five” version.”

Kentucky, Indiana among teams to buy in annual College Hoops Stock Report – SI.com – Seth Davis: “Playing the market is all about timing, and even though I think the Wolverines can win a national championship, this is just not a good time buy their stock. Beginning on Jan. 13, the Wolverines will play six out of nine Big Ten games on the road, and all but one of those will be against a team currently ranked in the top 20. Plus, I don’t like that it has taken so long for sophomore forward Jon Horford to recover from the dislocated kneecap he suffered Dec. 15 against West Virginia. Horford is expected back at some point this season, but in the meantime Michigan is a little short on frontcourt depth.”