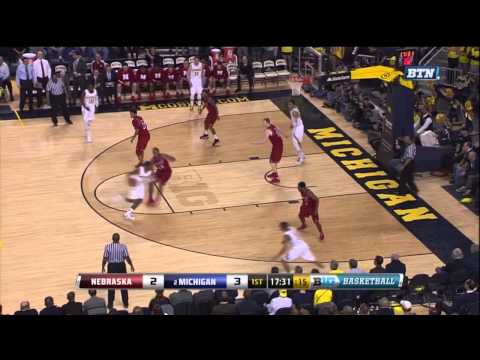 Those of us who remember watching high school highlight videos of Glenn Robinson III were less surprised by this play than those who have only seen him during his freshman year at Michigan. Robinson has found a niche for himself within Michigan’s offense as the coaching staff puts him at spots on the floor (mostly baseline area and in the post) from which he can finish plays and grab rebounds. However, that’s not all Robinson can do. The freshman showed a rather diverse arsenal of offensive moves as a high school senior, with the ability to stretch the court with his 3-point shooting — which he’s done at Michigan — while being quick enough to get by defenders off the bounce and strong enough to finish at the rim. On this play, Robinson gave Michigan fans a taste of what’s possible if he starts looking for his own shot and asserting himself in one-on-one situations. Robinson receives the ball at the top of the key and from there takes Nebraska’s Dylan Talley to the right before spinning left and finishing a tough floater in traffic. On a night when Michigan needed all the offense it could get, this was an important early bucket for the Wolverines. This play made it clear that Robinson is still merely scratching the surface of what he’s able to do — and he’s still averaging 12 points and six rebounds per game with a 65 percent effective field goal percentage.

2) Tim Hardaway Jr. drives to the rim in the first half

On Michigan’s worst shooting night of the season, it was incumbent upon the Wolverines to find shots close to the basket. This was difficult given Nebraska’s strategy of densely packing the painted area and generally not worrying too much about Michigan’s 3-point shooters. In the first half, Tim Hardaway Jr. found a way to score. The junior was looking to kick-start Michigan’s offense with hard-nosed slashing to the hoop and came up with some key buckets for his team. The plays in this sequence were mostly individual, one-on-one situations, like most of Michigan’s buckets — Michigan notched only six assists on the night. These makes near the basket show Hardaway’s continued progression from being a volume shooter to a lethal all-around scorer. Hardaway is a bit like Trey Burke in the way he uses his body to shield the ball from defenders while finishing at the rim, though at 6-foot-6, his body is a much more imposing barrier than Burke’s. Hardaway also shows off tremendous body control. Particularly during the first play in the sequence, Hardaway was inches away from a clear charge but somehow managed to slip his body in between Dylan Talley and Brandon Ubel for the bucket. Nebraska’s strategy of slowing the game down didn’t just revolve around slow offense, the Cornhuskers also were able to play strong defense for long stretches against the Wolverines. Hardaway demonstrates that Trey Burke isn’t the only Michigan player capable of scoring late in the clock as he uses his body to shield his defender in order to sink a floater in the paint.

3) Nik Stauskas pushes the ball with a steal and pass to Tim Hardaway Jr.

Nebraska went into its game against Michigan with clear goals: slow the pace of the game to a crawl, limit Michigan’s shot attempts and don’t give up easy buckets inside. The Huskers did an excellent job dictating the pace of the game, limiting it to a 57 possession crawl. Nebraska was able to eliminate Michigan’s transition offense by not turning the ball over and not crashing the offensive glass. This strategy worked well in the first half, with Michigan failing to score a single transition bucket. However, in the second half, it was this play that jump-started Michigan’s transition game and got the offense going. Nik Stauskas anticipates an awful pass from Brandon Ubel, but perhaps more important than the actual steal is the speed with which he gets the ball to Tim Hardaway Jr. streaking down the court. Nebraska already has two players getting back but they are in poor position to handle Hardaway as he drives to the hoop. Hardaway physically out-maneuvers his man at the rim and gets the and-1 opportunity, finishing with contact. With its transition game limited, this was one of the few times Michigan was able to get out and run in the open court and the Wolverines would slowly be able to find more transition opportunities in the second.

A 57 possession midweek game against one of the dregs of the league isn’t necessarily going to keep the crowd on its feet. These two plays in the second half energized the crowd in a way that only Glenn Robinson III can do it. After creating his own shot in a one-on-one situation in the first play of the feature, here Robinson is back to getting his points through great defense and opportunistic play on offense. These two successive buckets essentially took Nebraska out of the game — Robinson’s tip slam pushed the lead back to seven, and from there the Wolverines rolled as the Huskers never got any closer than that. While there isn’t much to say about the first play itself — Robinson simply jumps a pass from Dylan Talley to Shavon Shields and streaks to the hoop — the play is just another example of the previously-unknown athleticism Michigan now has on its team. Robinson took off from between the second and third hash mark — something that makes Michigan fans recall the frequent flights of Brent Petway. On the second play of the sequence, Nebraska completely falls asleep on the defensive glass and Robinson takes advantage. The freshman sees a wide-open lane to the basket and takes off from the 3-point line to corral a miss by Caris LeVert. Robinson slams the tip home with two hands, leaving the Huskers confused as to who was supposed to be boxing him out.

Mitch McGary continued his season-long impression of a whirling Dervish on the court with his play against Nebraska. The freshman made some mistakes (a missed dunk comes to mind) but he also made some plays like the two in this sequence that surely made John Beilein smile. Say what you want about McGary, but when he’s on the court, you know it. On this loose ball in the second half, McGary pretty much takes out Nebraska’s David Rivers and secures the ball among four Cornhuskers to get Michigan the possession on the jump ball. During the play quickly following, Nik Stauskas runs a pick-and-roll with McGary, who expertly seals off his man in order to catch the ball and put in the layup in one fluid motion. This basket was the only one on the night for McGary, but he is the epitome of a player who adds a lot to a team without scoring points. The Chesterton native grabbed six rebounds and blocked two shots (though he was only credited for one) along with notching a steal, all in 18 minutes. McGary is truly learning on his feet as far as playing the way Beilein and the rest of the coaching staff want him to, and it won’t get any easier in the Big Ten. However, it appears he’s learning fast and any point production Michigan can get out of him is pretty much house money considering their myriad of already-productive scoring options.