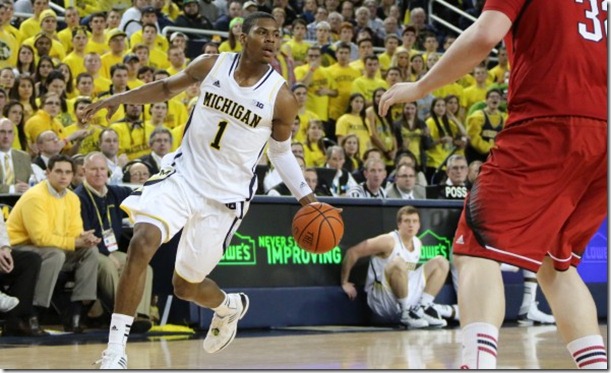 Robinson continues to be one of the most efficient Wolverines on the roster: the freshman hasn’t shot below 50 percent from the field since Western Michigan in early December. Against Iowa, Robinson had perhaps the quietest double-double on record with 20 points and 10 rebounds while shooting just over 60 percent from the floor. Against Nebraska, Robinson shot 5-of-6 for 14 points and also provided Michigan with a shot in the arm with two thunderous second-half dunks.

After playing as well as a point guard can play for two games and being shirked a perfect 10 last week, Burke’s rating falls only because it is pretty much impossible to keep up that kind of play every game. Against Iowa, Burke was his usual transcendent self: 19 points, 12 assists, one turnover. But against Nebraska’s slow-it-down style, Burke had a tougher time finding his teammates (three assists) and needed 16 shots to score 18 points. Burke made plenty of plays and kept his team afloat at times offensively — he just didn’t do it as efficiently as he has been.

Hardaway continues to stuff the stat sheet to near-bursting levels. The junior was lethal from 3-point range against Iowa on Sunday, hitting three of five shots from deep, but he also grabbed five rebounds and dished out five assists. Against Nebraska, Hardaway struggled with his efficiency in a similar fashion to Burke (15 points on 14 shots), but managed to snag 11 rebounds in a game that saw plenty of missed shots. Hardaway also continues to be a terror for opposing teams off the bounce, consistently getting points while driving to the rim.

After two so-so efforts last week, McGary really stepped up his play this week in Big Ten victories over Iowa and Nebraska. His point production is still pretty low, but that’s the last thing about McGary’s game the Michigan coaches care about. The freshman makes some mistakes when he’s out there, but he is a prodigious rebounder (he had 17 rebounds combined against Iowa and Nebraska, five of which were offensive boards) and he protects the rim: three blocks against Iowa, including one that could be considered a game-changer.

While Stauskas isn’t scoring at quite the rate Michigan fans were used to earlier in the season, the freshman is showing his development as an all-around scorer who can hurt opposing defenses in many different ways. Stauskas scored 13 points in each of the past two games, but against Iowa he displayed his leaping ability with an impressive dunk in traffic. It appears Stauskas’s 3-point percentage is regressing toward the mean, but only slightly as he’s still at 52 percent.

While he had a great game against Iowa, scoring nine points on five shots, LeVert was mostly ineffective against Nebraska. The freshman missed every shot he took, which is decidedly uncharacteristic for him. However, we can bet on LeVert’s role in the offense continuing to grow with his experience.

It has been a mostly forgettable week for Jordan Morgan. The redshirt junior is again experiencing problems staying in the game in the face of foul trouble, which has caused his production to take a severe hit. Since recording his third double-double of the season against Northwestern, Morgan has scored four points in the past two games combined. It should be noted that Morgan pulled down 11 tough rebounds against Nebraska, but Michigan coaches would have loved to see some points for him in the scoring column along with them.

Albrecht continues to spell Burke, but it appears that with Big Ten play looming and tougher games ahead, his effectiveness should be expected to hover around where it’s been the past few weeks. He remains valuable as a reliable relief pitcher for Burke.

Bielfeldt did not play against Nebraska and recorded one point and one rebound against Iowa. His role will likely diminish with the possible return of Jon Horford this Sunday against Ohio State.