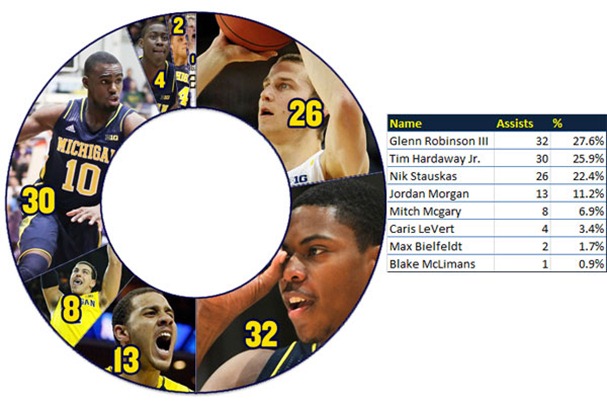 Luke Winn published a great piece earlier this week examining Syracuse’s assist-heavy point guard Michael Carter-Williams. Winn dove inside the numbers to examine Carter-Williams’s assists: how they came to be, who scored them and everything in between. Winn is one of the most insightful sportswriters in the country and he chose one of the best point guards in the country but Michigan also has a point guard worth writing about and this seemed like a perfect time to take a closer look at Trey Burke. Using many of the same frameworks that Winn constructed, we fired up the film and charted all 116 of Trey Burke’s assists. And while Burke isn’t on nearly as astronomical of an assist pace as Carter-Williams, he still hands out his fair share of assists, fewer turnovers and is a much better scorer to boot. (Photo: Dustin Johnston)

Trey Burke’s assist rate is up to 40.4% compared to 28.7% as a freshman and while Burke has improved every aspect of his game from a season ago, his teammates are also significantly more effective at finishing opportunities. Michigan is shooting the ball significantly better this year than last year (especially from three point range) and Burke is benefiting. That improvement is directly attributable to Tim Hardaway Jr.’s ability to snap his sophomore slump (his eFG% is up almost 8%) and the influx of two freshman that are two of the top 25 most efficient shot makers in the country.

The following graphic shows the distribution of Burke’s 116 assists so far this season.

Nik Stauskas and Glenn Robinson III have accounted for exactly half of Michigan’s assists while Michigan’s top two big men combined have fewer converted Burke-assists than any of the Wolverines’ top wing players. Burke continues to feed his wings the ball in a position to score and they are getting the job done. Morgan and McGary aren’t poor finishers by any stretch so their lack of Burke conversions has more to do with not getting the ball than botching easy opportunities (although there have undoubtedly been some).

2. Tim Hardaway Jr. is the No. 1 transition target

37% of Burke’s assists to Hardaway come in transition and the 6-foot-6 junior accounts for over a third of Burke’s full court assists as well. Mitch McGary is the other Wolverine that Burke seems to get involved more often in transition as McGary is generally active running the floor.

3. It’s all about the threes – and avoiding bad twos

Burke’s assists generally result in one of two types of baskets: open threes or easy opportunities at the rim. Here’s a look at the distribution of Burke’s assists by shot type:

Michigan is a great three point shooting team and Burke has a handful of great options to kick on the wings. The fact that 51% of Burke’s assists lead to dunks or layups goes a long way toward explaining Michigan’s NCAA-best 57% two point percentage. If he’s not finding them for threes, Burke is finding his teammates where they simply can’t miss. Not to mention when Burke doesn’t find a teammate in the paint, he usually converts himself with a stellar 61% two point shooting percentage.

If the Wolverines don’t get a layup, they’ll usually get their money’s worth and attempt a three. It’s notable that Michigan is able to avoid taking two point jump shots. The Wolverines avoidance of two point jumpers isn’t just a Trey Burke phenomenon, Michigan does a great job of it as a team.

Take Burke out of the equation, and Michigan is even less effective on two point jumpers. Burke is elite in the medium to long (17-foot to 3-point) range, shooting 17-of-26 on the season, and actually accounts for 22 of Michigan’s 50 made two point jump shots this season. That leaves his teammates a combined 28 of 80 (35%) on two point jumpers.

4. Getting into the lane

Burke is far from a one trick pony. He manages to distribute the ball in almost every way imaginable. The following chart breaks down the various play types that led to Burke’s 116 assists.

Over a third of Burke’s assists come off of some sort of drive action whether he’s dishing the ball in the lane or kicking to the perimeter. It starts to become clear that Burke has a favorite target in different scenarios. We already touched on his affinity for Tim Hardaway Jr. in transition but in the half court he loves to dish to Glenn Robinson III and kick to Nik Stauskas – who wouldn’t?

One area where Burke has struggled is finding the roll man in pick-and-roll scenarios. While Burke is a lethal scorer when using ball screens – scoring 1.38 points per used possession with a 76.2% aFG% – he hasn’t been consistent in finding Morgan or McGary. In fact, two of his seven assists to the pick and roll man were to Max Bielfeldt, not Morgan or McGary.

Other Michigan players have been far more productive getting roll men involved in far fewer opportunities. For example, Nik Stauskas has only handed out 20 assists this season but has already found his big man six times on the pick and roll. The limiting factor preventing Burke from distributing off of the pick and roll appears to be his size as teams will hedge hard and prevent him from passing over the top forcing him to make a play in an isolation situation.

Burke’s ten assists off of out of bounds plays stand out and a majority of those were accumulated in early season games – mostly off of lobs to the rim or quick passes to open three point shooters. Those opportunities have mostly dried up against stronger and more prepared opposition.

The bottom line is that Burke’s ability to create for others is dependent on his ability to get into the paint. His quickness – and more importantly change of pace – has allowed him to do that against almost every perimeter defender he’s faced this season. Once he gets in the paint, he has the defense beat whether he finishes himself, kicks to a shooter or dishes the ball to an able finisher.