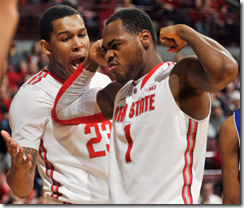 “How you expect to run with the wolves come night, when you spend all day sparring with the puppies?” – Omar Little

The time has come for Michigan to run with the wolves. The Wolverines have lost 16 of the last 19 against Ohio State and haven’t won at Value City Arena since 2003. This is Michigan’s most difficult game to date but things won’t let up from here on out and it’s time to make a statement. Michigan travels to Minnesota next and will face road trips to Illinois, Indiana, Wisconsin and Michigan State in the next month. Michigan’s perfect start has featured an aesthetically pleasing and entertaining brand of basketball and the Wolverines have proven they are one of the best teams in the country. Now it’s time to test their resilience.

Buckeye fans might call Ohio State’s start to the season disappointing but that disappointment is more a product of just how dominant the Buckeyes have been in recent seasons. This is still a very good Ohio State team. The Buckeyes lost games to Duke and Kansas, two teams that are a combined 28-1, and badly at Illinois while navigating their other 12 contests with relative ease. This isn’t the same team that went to the Final Four last year and there’s no doubt that the departures of Jared Sullinger and William Buford have taken a toll on this roster. But there are still plenty of great options at Thad Matta’s disposal. Deshaun Thomas is a lottery pick with the capability to get up as many shots as anyone in the country — he’s also shockingly efficient while doing so.  Aaron Craft is a great perimeter defender but the Buckeyes are just lacking steady scoring threats beyond that point.

And while the Buckeyes might lack peripheral scoring threats, their per-possession offensive output still ranks 18th best nationally when adjusted for strength of schedule. Thad Matta’s team finds turnovers just as abhorrent as any of his recent Buckeye squads and still shoots the ball well inside (51%) and outside (37%). This Ohio State team is slightly less effective on the offensive glass but is still an above average offensive rebounding team as a whole. This is only a “down year” offensively for the Buckeyes because the last three years saw a nearly historically efficient offensive team.

According to Ken Pomeroy, Ohio State has the third best defense in the Big Ten this season and is 13th best in the country. That means the Buckeyes are hands down the best defensive team that Michigan has faced this season and, just like on the offensive side of the ball, only appear to have regressed because they were one of the best defensive teams in the nation over the last two seasons. Ohio State is still strong across the board in each of the four factors and while the Buckeyes might not grab quite as many defensive rebounds or force as many turnovers, both areas are far from a weakness. In fact, the Buckeyes actually defend twos more effectively (41%) and block more shots than year’s past thanks to more defensive prowess around the hoop.

The pace of this game should be a storyline within itself. Both teams should be willing to run which is something that hasn’t been true in recent years. The last nine match-ups have averaged just over 60 possessions per game with five games registering at under 60 trips. Michigan was the team slowing things down in recent years and but the Wolverines should finally be willing to run against the Buckeyes. The Wolverine offense has been significantly more effective in faster games and John Beilein finally appears to have the horses to run with Ohio State.

Deshaun Thomas is a stat stuffing monster, averaging 20 points, seven rebounds and two assists per game, who will be headed to the NBA shortly. Thomas accounts for nearly one third of Ohio State’s field goal attempts when he’s on the floor but is very efficient, converting 52% of his twos and 40% of his threes. Michigan fans should be familiar with Thomas as he killed the Wolverines a season ago to the tune of 20 points and eight rebounds (4 offensive) per game with a 68% effective field goal percentage. Simply put, the Wolverines had no answer for the 6-foot-7, 225 pound scoring dynamo.

This year, Michigan has something it lacked a year ago, a player with the prerequisites to guard Thomas. Glenn Robinson III has never defended someone quite like Thomas but he’s certainly the Wolverines’ best option. He has the height and athleticism that Zack Novak lacked to potentially neutralize the match-up. Robinson’s ability to slow the leading Buckeye could very well be the difference in the game as Thomas is significantly efficient in Ohio State losses with a 49% effective field goal percentage.

While Glenn Robinson III’s match-up with Deshaun Thomas might be the game’s most important, don’t forget about Lenzelle Smith Jr..The last time Michigan traveled to Columbus, Smith scored 17 points and grabbed 12 rebounds (8 offensive) and changed the game. Smith is actually Ohio State’s top supporting scorer, averaging just short of 11 points and six rebounds per game. Smith is the most consistent three point threat for Matta, connecting on 44% of his triples.

Aaron Craft is averaging nine points per game and is struggling with his three point shot. His 33% season average is deceiving as he hit 5-of-7 threes in the Buckeyes’ season opener and is just 9-of-35 (26%) since. Craft is a game changing on the ball defensive presence but he was a non-factor against Michigan offensively last season, averaging under six points and four assists per game with a 31% effective field goal percentage over three games.

Shannon Scott has emerged as the most productive setup man on the Ohio State roster with an  impressive assist rate of 36.8%. Scott values the basketball and racks up steals at a faster rate than any other Big ten player.

As a unit, Buckeye guards struggle to finish inside the arc as the trio of Craft, Smith and Scott is shooting just 44.6% on two point attempts. Long and athletic wing forwards Sam Thompson (6-7, 200) and LaQuinton Ross (6-8, 220) are both significantly more effective finishing at the rim but lack three point accuracy at a combined 16-of-60 (27%). Ross has struggled to find consistency. He’s reached double figures as many times (6) as he’s failed to score more than six points.

Down low Thad Matta leans on the duo of Evan Ravenel and Amir Williams. Together Ravenel and Williams average 11 points and nine rebounds per game but they are far from the most dynamic post threat the Wolverines will face this season. Williams excels as a shot blocker and offensive rebounder while Ravenel is the Buckeyes’ best defensive rebounder.

Ohio State’s undoing has been its offense. The Buckeyes have scored just 189 points on 212 possessions in their three losses, .89 points per trip compared to 1.19 points per trip in their 12 wins. Ohio State’s offense has simply struggled to make shots in its three losses, shooting 37% on twos and 28% on threes. If Michigan is going to remain undefeated it’s going to have to do it with its defense, something that hasn’t been required in most of the Wolverines wins this season.

Of Michigan’s opponents to date, only Pittsburgh has a resume equal to the Buckeyes and that’s largely a product of a subpar non-conference schedule by Jamie Dixon’s group. If Michigan remains undefeated after a trip to Columbus then make no mistake about it, the Wolverines earned it. Ken Pomeroy predicts a narrow 71-69 Ohio State victory, putting Michigan’s odds of remaining undefeated at 43%.