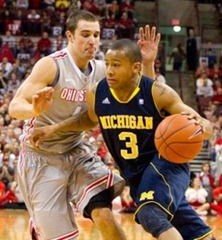 My answers to Chris Lauderback’s questions about the Michigan-Ohio State game are now posted at Eleven Warriors. Here’s a snippet:

You can’t play the point guard position much better than Burke has played it this season. He’s not just scoring, he’s scoring extremely efficiently. He’s not just setting up his teammates all over the floor, he’s also not turning the ball over. Burke’s rise from nice point guard prospect to fringe top-100 player to Big Ten co-Freshman of the Year to now perhaps the best point guard in the country has been a joy to watch for Michigan fans.

Burke’s offensive rating is the best among players using at least 24 percent of their teams’ possessions. His assist rate is in the top 15 nationally, he’s making 61% of his twos and 39% of his threes. He had 17 turnovers in his first five games but took the turnovers out of his system after the Preseason NIT. In the last 10 games Burke has racked up 82 assists to just 11 turnovers.