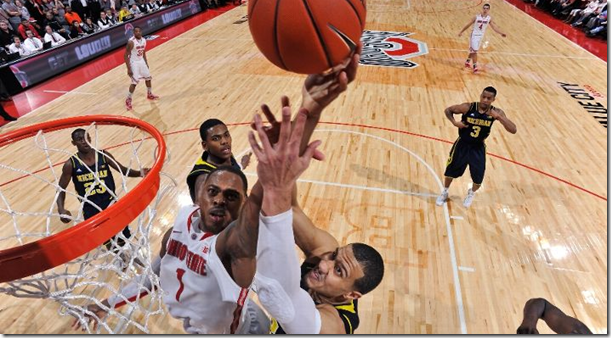 Michigan finally looked like the youngest team in the Big Ten. The Wolverines were blitzed early in Columbus and looked shell shocked while falling behind quickly. Michigan’s offense looked nothing like the efficient, low turnover scoring machine that it has been all season. The Wolverines turned the ball over eight times in the games’ first 10 minutes and took 14 minutes to reach double digits in the scoring column.

Ohio State built its lead to as many 21 points in the first half but slowly and surely Michigan was able to correct its early mistakes. The Wolverines cut the turnovers and increased their defensive pressure to come all the way back and tie the game at 46-46. The Buckeyes had one more answer. Ohio State responded with a 6-0 run of their own and Michigan was never able to regain the lead as a Trey Burke three, which would have given Michigan a one point advantage, went in and out with 16 seconds to play.

Michigan’s offense was finally stopped. The Wolverines scored just 53 points in 59 offensive possessions and were held below the one point per possession threshold for the first time this season at .90 points per trip. Turnovers and errant three point shooting were Michigan’s undoing.

After turning the ball over eight times in the first quarter of the game, Michigan was able to limit itself to just five turnovers over the next 30 minutes but still coughed the ball up on 22 percent of its offensive possessions. Many of Michigan’s early turnovers were “turnovers for touchdowns” resulting in easy Buckeye points. Ohio State scored 16 points in the first half off of turnovers and 18 for the game.

The Wolverines made 44% of their twos and 30% of their threes for a 45% effective field goal percentage. Michigan was unable to make an impact on the offensive glass corralling just 23% of its missed shots for four second chance points. The Wolverines were able to somewhat overcome their poor shooting by getting to the free throw line, attempting 15 free throws to 47 field goal attempts. Perhaps the most troubling aspect of Michigan’s offensive performance was its inability to convert transition opportunities – something that has been one of its greatest strengths this season.

Michigan’s comeback effort was fueled by defensive improvement. After surrendering 1.21 points per possession in the first half, the Wolverines tightened the screws in the second half and held the Buckeyes to just 22 points on 31 second half possessions (.71 PPP). Obviously Michigan dug itself into far too deep of a hole (on both ends of the floor) but the second half defensive effort was impressive enough to bring Ohio State’s per-possession output to just .95 points per possession. The Wolverines dominated the defensive glass, rebounding 79% of Ohio State’s misses and held Ohio State to below average shooting numbers, 49% on twos and 33% on threes.

The Wolverines inexplicably fell in love with the three point shot after tying the game at 46 a piece with 5:59 to play and it cost them the game. Michigan attempted eight threes after tying the game and made just one (Burke’s relatively meaningless banked triple with one second to play). The Wolverines attempted just two twos in that span (a missed long jumper and a transition dunk) and shot two free throws. Burke, Robinson, Hardaway and Stauskas all bought raffle tickets down the stretch but none went home a winner. Whether it was hero ball or something else, the late inefficiency ruined Michigan’s valiant comeback effort.

Michigan responded to its dismal start with a valiant effort but will have to build off of this performance. Things won’t get any easier as the Wolverines head to Minnesota on Thursday to face another Big Ten contender on the road. It’s time for Michigan’s freshmen to grow up quickly and Thursday will provide a great, but challenging opportunity to rebound.