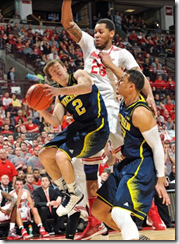 Michigan’s perfect start to the season came crashing down as the Wolverines were ran off the court early in Columbus and could never fully recover. Ohio State opened the game on a 26-6 run and John Beilein’s team was forced to play catch up for the final 30 minutes. While Michigan made a valiant effort and was able to tie the game at 46 in the second half but it wasn’t enough as a 6-0 Ohio State run helped seal a 56-53 victory after a late three from Trey Burke went in and out with 13 seconds to play.