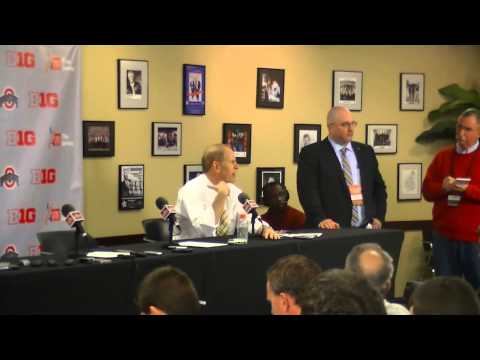 John Beilein faced the media after Michigan’s three point loss at Ohio State. Watch the coach’s press conference in the embedded media player below or read highlighted quotes after the jump.

“Watching film and watching them today, Ohio State is a really, really good defensive team. And you are watching a team that plays defense, buys into it and then very skilled defenders on the perimeter. Really proud of the way our guys worked. If you check the minutes you’ll see five freshman played almost double digit minutes. They didn’t have a freshman see the floor. It’s adversity at this time of the year. Most teams now are seeing their first top level teams on the road. Just watch your scores and a lot of the questions you have will be answered. There’s a lot that goes through the season and it’s a journey. We have to embrace an important part of it today”

On leaving points in transition: “They are a very good team and we have to find [a few more] plays. But there were a few times that we probably tried to make plays that we don’t always make. We’ll learn from a lot of those things.”

On what he told the team coming back: “There’s only one way we’re doing this guys. Stop by stop. Possession by possession. We felt like we had to be more efficient offensively, whenever we got away from poise and patience offensively it got us in trouble.”

On Trey’s shot at the end: “The shot clock was going down a little bit. He can make that shot for us. Obviously you’d like something a little better but at that time that was a pretty good shot as you can see – it was just like his shot against Arkansas and it was half way down.”

On the defense: “We got very very excited about this opportunity and got out and challenged defensively a little bit too much beyond our base defense. I like having the guys that have the big hearts and a lot of courage. That want to get after them. But you have to be very careful with their quickness when you are chasing around a four man that shoots like a two guard.”

On building off the loss: “This is terrific for us. Every coach will tell you that. when was the last team that didn’t lose? It happens. The teams that really prosper from it are the ones that get better from it. We had not played at op 20 team on the road yet and now I think we have four in a row.”

On late game shots: “We say play hard every day but we also have to play smart.”

On whether the team was too fired up: “We were pretty excited but I can’t measure it. We were really amped up for this game and came out with everything we had but sometimes that’s not always the best if you are trying to do things you haven’t done all year.”

On playing zone: “It was an option that worked, back and forth. I don’t know what our plus minus was in zone. We always have a couple things in our package to make sure of. Every game we try to have a package for everything. But anyone who watches us play we’ve been playing man for three years – 90 percent – so all you guys who still think I’m a 1-3-1 guy it rarely happens. But if you want to keep saying it maybe the other teams will believe it.”

On the freshmen: “I’m proud of them and they battled. This could have been a 30 point game. All of you have computers, do your homework and see how many teams are playing five freshmen.”