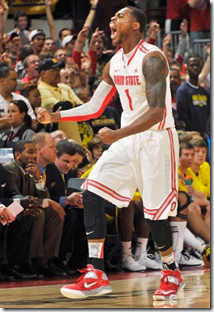 While Indiana and Wisconsin are the only remaining undefeated conference teams, Michigan still sits at the top of the efficiency margin chart. The Wolverines are outscoring their opponents by .27 points per trip thanks to league leading offense and above average defense. Of course those stats are also buoyed by a couple of blow out wins to open the season against Northwestern and Iowa.

Wisconsin might not generate all of the headlines and buzz but Bo Ryan’s team seems to be figuring things out after a mediocre non-conference slate. Sure, Wisconsin has only beaten Penn State, Nebraska and Illinois but the Badgers are playing defense better than any other Big Ten team. Ken Pomeroy’s in-conference strength of schedule metric proves that the Badgers have played the easiest league slate and by a fairly wide margin.

The question for Minnesota is whether the Gophers are capable of defending at the level required to compete at the top of the league. Tubby Smith’s team has already played at Indiana and at home against Michigan State but the Gophers are lagging behind other conference contenders on the defensive side of the ball. With Michigan headed to town on Thursday, fans will get a chance to see the two best offensive teams in the league face off.

This one looked like it was destined to be the disappointment of the week rather than the week’s best game but Michigan recovered from a horrific start and was able to make things competitive. After falling down by as many as 21 points in the first half, Michigan managed to come all the way back and tie the game at 46 a piece in the second half. Ohio State responded and put the Wolverines away after a late Trey Burke three rattled in and out. The win capped off a week of validation for the Buckeyes, who also picked up a solid road win at Purdue on Tuesday.

Disappointment of the Week: Illinois

The last week was never going to be easy for Illinois with games against Minnesota and at Wisconsin but the Illini were blown out of the gym. The Illini fell 84-67 to Minnesota on their home floor before traveling to Wisconsin and getting their socks knocked off again. The Illini have now lost four of their last six games and have a lot of proving to do in Big Ten play. The Achilles’ heel of the 2013 Illini is obviously defense. Illinois is surrendering 1.06 points per defensive possession, tied with Penn State as the second worst in the league.

Stat Line of the Week: Victor Oladipo
20 points on 8-of-10 shooting with six rebounds, three steals and two assists.

Oladipo was a dominant force in Indiana’s win over Minnesota and continues to push for All-Big Ten first team status. Oladipo now touts the best effective field goal percentage in the country at 73% and he accumulates steals more quickly than any Big Ten player other than Shannon Scott. The 6-foot-5 junior has improved his game in almost every facet and he displayed the whole package in a win over Minnesota.

Surprise of the Week: Where are all the close games?

The Big Ten is a good league, no one is disputing that but the first two weeks haven’t provided many great viewing opportunities. Just two of the first 23 Big Ten league games have been decided by less than four points or in overtime while seven games have been blowouts (defined by a 20 point margin or more). While the early blowouts are likely just a scheduling quirk, it’s clear that the bottom of the league is in for a long season.

Dawson went down with what looked like a bad re-injury of his left knee against Nebraska on Sunday but was able to bounce back. Dawson left the game with Nebraska leading by one but returned to play and helped the Spartans to an important home victory over the Cornhuskers. Dawson finished the night with 12 points on 6-of-7 shooting with six rebounds, three steals and a block.

Upcoming Game of the Week: Wisconsin at Indiana (Tuesday, 9 p.m.)

The league’s two remaining undefeated teams will face off at Assembly Hall on Tuesday evening. Wisconsin wants to play a slow defensive game while the Hoosiers will look to push the tempo and fill up the score board. We like Indiana’s chances to remain undefeated on its home floor but Bo Ryan has been around the block in the Big Ten and will certainly have his team ready to play.