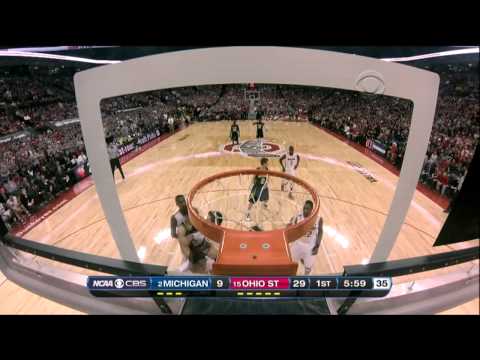 1) Spike Albrecht the lone bright spot in the first half

It’s safe to say that very few things went right for Michigan in the first half against Ohio State. The Wolverines struggled mightily to find open looks — that is, when they weren’t giving the ball over to the Buckeyes for transition opportunities. Michigan’s offense, which looked so lethal throughout the non-conference season (and the early conference season, for that matter), looked dazed and confused. At the six-minute mark, Michigan was down 21 points, on the road, with the game appearing to be effectively over unless Michigan could somehow find itself again. Enter: Spike Albrecht. Michigan’s backup point guard entered he game for a flailing Trey Burke and immediately made his presence felt as the only player on Michigan’s team who played aggressively. Albrecht took the ball to the rim when the rest of the Wolverines were firing (contested) jump shots and was rewarded with free throws, which he made. After getting fouled again, Albrecht made two more free throws. Then, finding himself wide open at the top of the key, the freshman sunk a 3-pointer. In just under four minutes, Albrecht had a huge hand in cutting a 21-point deficit to a much more manageable 14-point hole. After a layup by Trey Burke before halftime, Michigan found itself down just 12 at the break. Albrecht keyed the Wolverines’ comeback in the first half and was one of the only reasons they found themselves still in the game at halftime.

2) Tim Hardaway Jr. turns it on in the second half

Like every other Michigan player, Tim Hardaway Jr. had a rough first half. When he took the ball inside he was either defended well or couldn’t get a foul call, and when he took shots from outside he missed every time but once. But in the second half, Hardaway found his groove. Starting at about the 10:30 mark in the second frame and extending through the seven-minute mark, Michigan went on a 12-2 run that brought the Wolverines from down nine points to within one. Of the 12 points Michigan scored during this run, Hardaway was responsible for nine of them. On the first play of this sequence, Hardaway makes an excellent basket cut off an out-of-bounds play, which was surely highlighted as a weakness of the Buckeyes going into this game. Trey Burke inbounds the ball to Hardaway and the junior exhibits great strength with the ball, pushing through an attempted strip by Aaron Craft and finishing at the rim. Then, curling around a screen from Morgan, Hardaway takes the ball right at Evan Ravenel and DeShaun Thomas, finishing a tough shot over both of them. During this run, Michigan fans finally got to see Trey Burke and Hardaway connect on an alley-oop, and it was one of the smoother plays of the season for Michigan. After getting a well-timed block, Hardaway hits one of the biggest shots of the game, a 3-pointer at the top of the key to pull Michigan to within one point of Ohio State. Hardaway was far from his best on Sunday but was clearly the catalyst in Michigan’s late push.

After fighting its way back into the game mostly through tough baskets inside, drawing fouls and the occasional transition basket, Michigan went through a stretch offensively late in the game in which the Wolverines inexplicably shot — and missed — five straight 3-point jumpshots. It appeared as though Michigan thought it was in a far more dire situation than it was, as nearly all of these shots were hotly contested and could only be described as low-percentage. When the Wolverines started firing up shots from long range, Ohio State got back to doing what it does best — bullying its way to the hoop inside and making high-percentage shots. However, the Buckeyes only made a few quick shots inside before going scoreless for a long stretch, which is what made Michigan’s shot selection during this time so painful.  An argument could be made that the period of about two minutes from 3:30 until 1:30 essentially decided the game. Ohio State was down — the Buckeyes missed one shot and turned the ball over three times, but Michigan simply couldn’t take advantage on the offensive end while Ohio State was giving it a golden opportunity to close the gap. Ohio State’s buckets down low were mostly the results of match-up problems — Ravenel scored on Tim Hardaway Jr., then DeShaun Thomas scored on Nik Stauskas. Of Michigan’s 3-point attempts, Glenn Robinson III’s was open, as was Hardaway’s final attempt. Other than that, none of them could be called “good” looks.

Even after the aforementioned stretch when Michigan briefly forgot there were other ways to score other than jacking 3-pointers, the Wolverines still had a chance to win, largely thanks to these two plays by Burke and Robinson. It looked to anyone who’s watched a basketball game that Burke should have been awarded an and-1 after his layup off the steal, but the referees called it a foul on the floor — before Burke eventually earned free throws on the ensuing half court possession. Directly after this play, Glenn Robinson III made a great play by jumping a pass to DeShaun Thomas and slamming home the basket on the other end. These plays were exactly the kinds of plays that Ohio State was making in the first half that allowed the Buckeyes to get out to such a large lead. In the second half, Michigan matched Ohio State’s defensive intensity tooth and nail and held the Buckeyes to just .71 points per possession. This highlights one area of a painful loss Michigan fans can be happy about: in a non-conference season that saw Michigan play terrific offense but at times lax defense, it appears the Wolverines are renewing their focus on the defensive end in time for the Big Ten season. Michigan’s defensive effort in the second half was nothing short of stellar, and these two plays to bring them within two points of Ohio State illustrate that

Obviously, this was not Trey Burke’s best game. That goes without saying. There were points throughout the contest when it seemed as though he had indeed made this match-up “personal” once again. There were times when he forced long, ill-advised jump shots that cost his team. However, it is an unreasonable criticism to say that Burke was simply out to “get his,” and that was why he was taking bad shots. Most of the time, it was because he was being guarded by the Big Ten’s — and maybe the country’s — best perimeter defender in Aaron Craft. It is unreasonable to think that because Craft was playing great defense on Burke, that Michigan’s point guard should have taken himself out of the game and looked to his freshmen teammates to carry the offense. Yes, there were times when Burke should have looked to his teammates. But after being Michigan’s main source of points for nearly every game this season, Burke should not be criticized for continuing to look for his own opportunities, even when his shots weren’t falling. I’m bringing this up is because if this shot lands a quarter-inch shorter than where it did, we could be talking about Burke’s late-game heroism, his ability to bring Michigan back against all odds, how he makes them when they count. We aren’t, because the shot rimmed out. Burke deserves criticism because he didn’t play a very good game, not because he’s “selfish” or he’s looking to “get his.”

As for this final play, Michigan attempts to run a pick-and-roll at the top of the key with Robinson as the screener (which was mistakenly cut from this video). That action goes nowhere (due to poor execution by both Burke and Robinson) and the shotclock is running down, Burke is left in a situation where his only real option is isolation against Craft. He actually does a great job of creating separation on the shot and almost finds the bottom of the net.