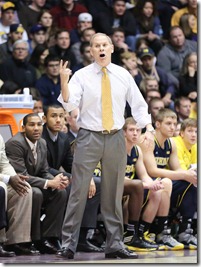 John Beilein joined the rest of the Big Ten coaches on a conference call on Monday. Beilein discussed his team’s tough loss to Ohio State, what it’s like playing in the Big Ten with five freshmen and more. You can read selected notes and quotes below.

Opening statement: “We had an exciting game in Columbus yesterday. We didn’t come out with the win we had hoped to have, but we learned a great deal, we will learn a great deal from it. Hopefully it will be very positive in our development as a team. Going on the road right now, playing high-level teams on the road, is going to be a challenge for us and for everybody in the Big Ten. Great conference, and I expect the wins and losses to be very difficult challenges for everybody all year long.”