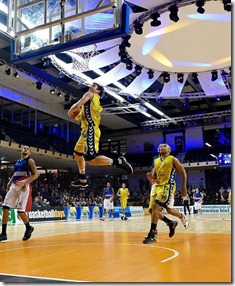 Former Michigan guard and three time captain Zack Novak has linked up with us occasionally throughout the season to discuss life as a basketball player overseas as well as sharing his thoughts on Michigan’s season. In part one of this update, Novak discusses the Netherlands as well as what went wrong for the Wolverines at Ohio State.

First off, how are things going in the Netherlands? How’s life overseas and how’s your season going on the court?

Things in the Netherlands are going well overall. I’m really enjoying the experience of living in another country and learning about another culture. My teammates are all great guys and I’ve made some friendships that will last a very long time. I’m to the point now where the language barrier isn’t that big of an issue any more, which is huge. One time earlier this year, I mistakenly bought paper towels instead of toilet paper three times in one week! I’ve also started to cook quite a bit more than I did in the past. I thought I was getting pretty good until two days ago when I was trying to up some minced garlic in olive oil and pork fat to make some homemade carbonara sauce. The pan got too hot and some garlic and oil shot up and burnt a little spot on my face. Normally I would be upset, but it left a sweet scar and by now I think everyone knows my stance on scars, so I was strangely at peace with the whole incident.

As for the the basketball, we won our holiday tournament, which was really nice for our team. We struggled the second time around the league so it was great to get some wins. The team we beat in the championship game plays in the European Challenge and is undefeated in the Estonian league. On Sunday, we beat the Gas Terra Flames from Groningen by three in a thriller. I hit two big free throws with about 5 seconds left to put us up three and ended up with 28 for the game. My teammate, Tanner Smith, scored 25 for the game and had 5 steals! If that name sounds familiar it is because he played for Clemson and took 2 L’s to the Wolverines during his college time, which I remind him of quite frequently :) (I will get back to the smiley face). Groningen is one of the top teams in the league, so the win definitely gives us confidence going into the third time around the league. Our team has the ability to beat any team on any given night, so I’m excited that we got a signature win that we have been looking for.

Regarding the creepy smiley face, everyone here suffers from the habitual overuse of smiley faces in any sort of texting communication. I just wanted some of you to share in the awkwardness :p

If you were in the locker room after the Ohio State game, what would your message be to the team? What do they have to do to turn things around before heading to Minnesota?

I’m going to preface my answer by saying that I’m sure the leaders on the team said whatever is necessary to get the team back up after the disappointing loss. I’m not there every day, but there is zero chance any team in the nation could start 16-0 without having a voice in the locker room. If I was the captain of this team, I would not have come into the locker room and given a Hollywood “this is a major turning point for our team, blown out of proportion, super dramatic speech.” This team has played far, far beyond their years to this point and to keep that up without a single hiccup all year would have been nearly impossible. I was proud of the way those guys fought back to give themselves a chance to win. To me, that showed the maturity that we have seen all year that made them successful. At the end of the day, this is one game! You guys all know the drill by now. You learn a lot from losses and the Big Ten is so insanely competitive this year that you don’t have time to let one loss bother you.

Don’t get me wrong. Those guys are mad that they lost that game and rightfully so. The key is using that feeling that puts a pit in your gut after a game like that in order to take your focus and execution to another level for the next game. They will do that.

What went wrong on the floor against Ohio State? What problems are correctable?

Well for the first 10 minutes of the game, it seemed like everything that could have gone wrong, went wrong. Coach has referred to “locking the rails” in describing what OSU does to guard sideline ball screens, a huge staple of the offense. They do this better than anyone else. Many teams will take away a ball screen by having the defender on the ball play with his butt to the other sideline and bringing a big man in front of the ball handler. They take it to another level. They pretty much play the ball handler not to go to the opposite corner of mid court, essentially taking away any chance for the ball handler to still use the screen. This takes away all uncertainty a big man would have in playing in front of the ball handler.

In other words, big men usually hedge after a ball handler uses a ball screen. Even if the plan is to deny the ball handler from using it, the big still must be ready to hedge in the event the defender does not prevent the screen from being used. This uncertainty can cause big men to be just a fraction late, which in basketball is enough time for a good offensive player to exploit it.

In my eyes, it seemed like their big men were in position every time because they knew there was no chance the guard could use the screen. This disrupted Michigan’s rhythm early, as they had not faced a team with that kind of athleticism that had the personnel to pull off a scheme like that. It was obviously correctable because, eventually, they figured it out. By that time they were down 20 and had to claw their way back. The energy that has to be used to come back from a deficit like that is enormous. After they scored became tied, we struggled to hit some shots and I think some of that had to do with the effort it took just to get back into the game.

Michigan switches almost every screen defensively and often times got caught in a bad defensive mismatch (i.e. Burke on Thomas) at Ohio State. Explain the rational behind the switching and whether you think Michigan is switching too many screens or what the solution is.

Switching has always been a big part of the way we defended teams because we had guys that were very similar in size and defensive abilities. There’s a little enough difference between Tim and Trey or Tim and Nick to switch a lot of the screens involving them. In my opinion, the theory behind switching is that if you do it correctly it is much easier to do one of two things.

First, you can switch to deny an offensive opportunity, thus disrupting the opposing team’s flow. You can take this to another level when you change switching patterns through a game. I know as a player, I came to the bench several times in my career and said “so and so is switching and doing this so we should run X play.” Other teams do the same thing. If you can change who switches throughout a game, though, it makes it harder for the offense to get into a groove and call plays to exploit the defense.

Second, you switch to limit separation. When you come off a cut as an offensive player, if your defender doesn’t switch you should have some bit of room to operate. Some players need more space than others, but if you come off of the screen correctly you should have something. If the team switches correctly, the new defender has already beaten you to a spot and you don’t have any separation at all. Basketball players need space to score! Defensively you want to limit the space guys have to operate and offensively you want to give your guys as much space as possible to work. I can tell you with almost certainty, Trey getting switched on to Thomas down low under the basket is probably not in the cards beforehand, but happens in an emergency situation.

There are so many factors that go into a switch that some fans do not realize. Switching patterns can change several times throughout a game and it sometimes gets as detailed as only switching on certain plays the other team runs or even three man switches on some screen the screener actions. Sometimes you only switch with certain guys on the perimeter, while you wouldn’t switch with them down low. Sometimes you switch every time it keeps the guard on the perimeter and bigger guys down low. This is all assuming one guy doesn’t get beat and require help! Then all bets are off. You have to scramble to find any man and prevent a team from getting a good look. Everyone will be mismatched.

With the 35 second shot clock (which I think is too long after playing with a 24 and watching college games) if you get into a scramble situation in the first half of the clock, that means you might have a center on the point guard, and a three man on the center and the point guard on the two guard. Its not always easy to adjust back to the correct match ups, so then you might see Trey guarding Thomas. I’m confused even trying to explain this, so imagine all of this happening within split seconds. I imagine this is one of the harder aspects for the young guys to adjust to because it takes a ton of practice to get these switches to be come instinctive and automatic. Time and experience is the fix for this issue. As for what I think about the amount of screens being switched, I will never question anything strategically that the Michigan coaches do. Those guys know a lot more than me about basketball!