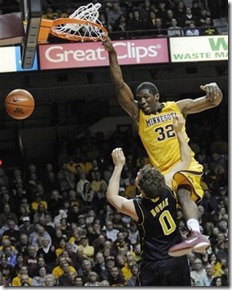 In part two of our interview with former Michigan captain Zack Novak, we discuss Thursday’s upcoming game against Minnesota and what Novak has seen out of Michigan’s freshmen. Catch up with part one here or read part two below.

I get the sense you’ve watched your fair share of Big Ten hoops this year. Have you had a chance to watch Minnesota? How do you see Michigan matching up with Minnesota?

Of course, I watch every Michigan game. Most of them I can catch live, but even if I can’t I watch them on the DVR as soon as possible. I do have a ton of free time over here, so whenever Big Ten games are on, I usually try to watch to see what we’re up against. My good friend (and fellow former #0 jersey repper), Kory Barnett, is the graduate assistant at Indiana this year, so I do try to catch most of his games as well. I got a chance to watch Minnesota on Saturday and they went through the same sort of start and comeback that we had Sunday.

The first thing that stands out about Minnesota is their size and athleticism. It never really killed us against them in the past, so with a bigger, more athletic team this year, I don’t suspect that will be a major issue. I do think with us having a young team, playing a team that is more “grind you down” rather than running confusing action, will benefit Michigan. The Gophers don’t seem to be trying to trick anyone on offense, but they do have talented players and an absolute beast in Mbakwe. They took some questionably quick “shock” shots and had some turnovers against Indiana that lead to the Hoosiers getting out on the break. Indiana was pressing and had some traps in the half court to speed up the tempo of the game, which I do not think we will do nearly as much of, if we even do it all. That being said, I wouldn’t expect some of the same turnovers out of them; however, I do think with them having multiple guys that have scored 20 in a game this year, you can expect more than a few “my turn” shots that should result in some good fast break opportunities for Michigan. In case you have been living in a cave, Michigan on the fast break is a win. This game will without a doubt be competitive and would be a fantastic road win for the Wolverines. As a fan of the game of basketball, I’m particularly excited for a few match-ups.

Trey Burke vs. Dre Hollins – In my opinion, Hollins is the second best offensive point guard in the conference. The dude hung 41 on Memphis. He was the lone bright spot shooting the ball in a dismal first half for the Gophers against Indiana. He hit some tough threes off of the ball screen. Keeping him in check is key. With that, Yogi was able to get a few fairly easy lay ups against Minnesota. A determined Trey Burke, will be absolutely ready to go and I wouldn’t want to be the one assigned to guarding him on Thursday.

Glenn Robinson III v. Rodney Williams – Holy Athleticism. How many match-ups in college basketball feature guys with a combined vertical around 90 inches?! Rodney seems to have found some of the “Forget this I’m just going to hoop” confidence that is allowing him to do some of the things that were expected of him as a highly regarded freshman four years ago. G-Rob has been phenomenal all year. There was a play in Saturday’s game where Oladipo got free and went chest to chest to Rodney at the rim. I called it a tie because Rodney blocked the ball, but also got called for the foul. If the basketball gods deliver the same situation for us on Thursday, I think G-Rob finishes the job and flushes it.

Michigan Bigs vs Trevor Mbakwe – I’ve been on the wrong side of this man’s highlight. Though I gave up size almost every night, there were very few times that I felt absolutely helpless guarding an opposing player. Jeff Adrien, Blake Griffin and Trevor Mbakwe were three guys I guarded that I felt like a rag doll. Mbakwe will probably average a double double in the Big Ten this year and there is a reason he was on pace to be a first round pick before his injury. Luckily, this years team has been much better on the boards than past years. Our bigs have quietly been playing great (they didn’t miss a field goal attempt Sunday) and I believe they will rise to the challenge Thursday.

Michigan’s freshman have far exceeded expectations to date but hit a speed bump in Columbus. What has allowed them to be so great but also how do you see them reacting going forward?

The freshman have been amazing this year thus far. I watch them and think back to my freshman year and I’m in awe of the things they are able to do out there and the composure they have displayed on the court since day one. Each one of them has a confidence about them that not all players at that stage have. I haven’t done any research, but I’m sure even Anthony Davis had an off game or two last year. As a freshman in the Big Ten this year, you will see a lot of things you have never seen in your entire basketball playing life. The scouting in league play is tenfold what it is out of conference. Opposing teams know more about what each player is trying to do than the player probably realizes about himself. Look at the coaches in the conference. Nothing is going to be a secret to anybody once the game starts.

With the staggeringly hot start that those freshman had, the coaches around the league already realized they had to take their strengths away before the guys played a single league game. Part of the learning process is making those adjustments that allow you to still be effective when a team takes away what you do best. When that fails, there’s a reason Coach Beilein has been so successful in his career. He gets guys in positions they are comfortable operating in. I am not worried about the freshman moving on from here at all. One, they are a confident bunch. Two, they are really good at playing basketball. Like, better than a lot of other people they will play against. Simple as that.

Talk to me about Mitch McGary. What are you seeing out of his development and what are the next steps for him to take?

I think Mitch has really stepped up the last few games and you can start to see his maturity as a basketball player. I sense that he has realized how to hone his “motor” so that he uses his energy efficiently to help the team. He’s blocking shots, running the floor, guarding the ball screen, setting good screens, and finishing around the basket. I think it was the Iowa game that he single handedly changed the entire game. He has that natural ability to effect a game without putting up eye-popping scoring numbers. I think as Mitch moves forward and his body continues to develop with Coach Sanderson, he will be able to tap into so much of that natural ability we are seeing more and more each game. Having known Mitch since we were both kids, I can’t wait to watch him continue to grow as a player and enjoy the success which will come his way as he continues to work hard. Like all of the guys on the team now, he’s a great kid that deserves every bit of success that comes his way.