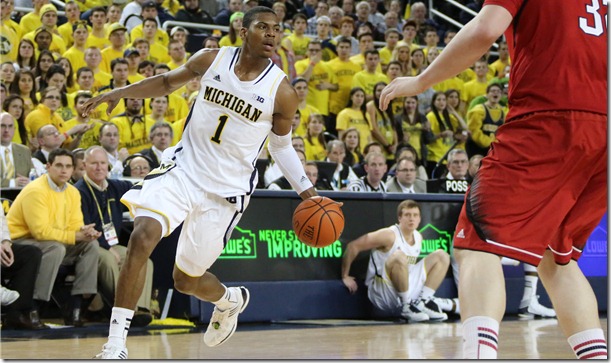 The immediate answer is no. Minnesota’s front line isn’t actually that massive, it’s just good. Trevor Mbakwe starts at the five at 6-foot-8 with Rodney Williams (6-foot-7) at the four. Andre Hollins, Austin Hollins and Joe Coleman round out the starting lineup and they all measure in between 6-foot-1 and 6-foot-4.

Thoughts on Michigan’s best (and worst) defenders, how Trey Burke was stopped against Ohio State, Michigan’s defensive philosophies and much more after the jump.

@BrandonGerth: We haven’t seen much of the high 1-3-1 defense this year. Why?

It’s a gamble. John Beilein has all but fazed the 1-3-1 out in the last two to three seasons and this year is no different. He almost mocked reporters in Columbus by reminding them that he’s barely ran the 1-3-1 in recent seasons but “they can keep publishing it because maybe other teams will believe it”.  He’s sprinkled it in for a few possessions here and there but usually only as a change of pace in dire circumstances. In recent years Beilein has opted for 2-3 and 3-2 zones more often because they are more conservative in nature. Michigan has never been great at forcing turnovers – with the 1-3-1 or not – so playing a gambling style of defense just hasn’t paid off. Ohio State in particular has been very successful against Michigan’s 1-3-1 zone in recent seasons.

Whatever zones Michigan has played, the results haven’t really been there. Using data from Synergy Sports, Michigan has played 92 possessions of zone defense this season and is surrendering .902 points per zone possession. That number is significantly worse than the Wolverines’ half court man-to-man points per possession allowed figure of .748 PPP.

@4our3hree: Do you think M’s philosophy of never fouling hinders their ability to have an elite defensive efficiency rating?

No. Fouling isn’t a requisite for good defense and there are plenty of great defenses that don’t foul. Thad Matta’s teams have made a living out of it and it’s a strong mantra to live by. So much of “not fouling” has to do with understanding what contact you can get away with and what contact you will get whistled for. Great teams are able to avoid fouling while still playing consistent and physical defense. Right now Michigan’s defense is probably somewhere in the middle – the Wolverines clearly can avoid fouling but could still be slightly more aggressive in contesting shots. That extra level of aggressiveness will come with time as Michigan’s freshmen develop on that side of the ball.

@joehid: What do you think our chances of being Big Ten champs are? What are the most important games?

I think the better question is how many losses will the Big Ten Champion have. A year ago Michigan, Michigan State and Ohio State tied at the top at 13-5. John Beilein hypothesized on Monday that the top spot could potentially be earned with six losses, because of how strong the league is.

I’m not so sure about that. I think five is likely the safest bet but I wouldn’t be shocked if someone makes it through the 18 game slate with four losses. Ken Pomeroy projects Michigan’s most likely conference record at 13-5, then 14-4 and then 12-6 – so a four or five loss season is very much in the realm of possibility.

Given the back loaded away-home nature of Michigan’s schedule, it’s absolutely paramount that the Wolverines figure out a way to win road games at contending teams. After losing at Ohio State, that means Michigan needs to figure out how to win some games at Minnesota, Illinois, Indiana, Wisconsin and Michigan State. Michigan will play all of those teams on the road first (or only on the road in the case of Minnesota and Wisconsin) and those road games fall in the next 30 days. Survive that month and the Wolverines come down the stretch the season with four games of six games at home including marquee games against Michigan State and Indiana on the final weekends of the regular season.

@4our3hree: Although it may be tough to determine, who do you think are the best and worst defenders on the team?

I can tell you what the numbers say, but I’m not sure what to make of them.

I examined the post defense in yesterday’s post so we’ll skip that for now (summary: Morgan is better than McGary defensively) but the guard data is interesting.

Tim Hardaway Jr. struggles because opponents shoot a lot of spot up jumpers over him and are successful doing it. He not only gives up the most spot up jumpers, he’s the worst at defending them 55% eFG%. It is interesting that opponents attempt fewer shots against Hardaway than any other player. The actual act of preventing shots is almost as important as the result because usually players are only going to shoot when they are somewhat open.

Burke, Robinson and Stauskas all have pretty good numbers but opponents go after Burke and Stauskas more often. As Burke usually guards the opposition’s primary ball handler, it makes sense that he’d have more attempts but it seems that opponents might be targeting Stauskas on the wing. To date, they haven’t succeeded in exploiting Stauskas as his defensive numbers are the best among Michigan’s guards and wings.

I’m also not really sure what to make of these numbers. A year ago, Hardaway graded out as Michigan’s best defender with .734 PPP allowed and a 38.6% eFG%. Has he regressed or are a few lucky shots enough to skew the data? By my eyes, he’s been a much more active and engaged defender in 2012-13 and has also vastly improved his defensive rebounding ability.

@jlustig22: Did Nebraska & OSU come up with the formula to stop Burke or was he just off? Seems they kept him out of the lane & creating for others

I think the approaches were very different. Nebraska slowed down the pick and roll game by playing under everything and daring Burke to shoot. It worked, but only because Burke had an off night. Ohio State was significantly more aggressive against the high ball screen — locking the rails — and was able to do so while still not helping off of Michigan’s wing play makers.

Give Nebraska credit for their ability to slow – almost shut down – Michigan’s transition offense but the Cornhuskers defensive strategy isn’t necessarily something to worry about long term. Michigan missed a lot of open shots in that game and isn’t going to miss those shots regularly.

Ohio State’s defensive strategy is something that probably every school in the conference would love to attempt but I’m not convinced they have the personnel to accomplish it. Aaron Craft and Shannon Scott are great perimeter defenders, easily two of the best in the league, and they have plenty of help and a great defensive coach. The Buckeyes were basically able to gameplan around the fact that Craft would be able to force Burke away from the ball screen without fail.

@carlbleich: had Evan Smotrycz not transferred, how different would the big man rotation be?

I think he would play 10-15 minutes per game at the four position backing up Robinson. In hindsight Smotrycz’s transfer looks like somewhat of a good decision given the fact that his role would have likely been reduced significantly this season. If he was frustrated by his role after last season, he wasn’t going to find the answer with the influx of freshmen talent in Ann Arbor.