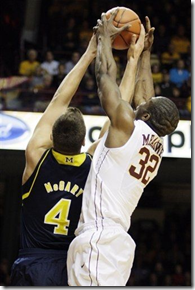 Michigan hit the road for Minneapolis needing to make a statement after a disappointing loss at Ohio State and managed to do just that. The Golden Gophers gave the Wolverines a fight but Michigan was able to keep No. 9 ranked Minnesota at arm’s length for 30 minutes before prevailing with a pivotal road win.

Tim Hardaway Jr. stole the show in the first half, scoring 17 first half points before finishing with 20, while  Trey Burke (15), Nik Stauskas (11) and Glenn Robinson III (10) joined him in double figures.

Michigan’s offense was the lethally efficient once again, to the tune of 1.29 points per possession. Although the Wolverines appeared ready to turn the second half into a personal highlight film – Glenn Robinson III took top prize with a 360 dunk (click for video) – but Minnesota answered the bell. The Gophers cut into Michigan’ 19 point lead, chopping it to as few as seven points before the Wolverines prevailed with a 83-75 win.