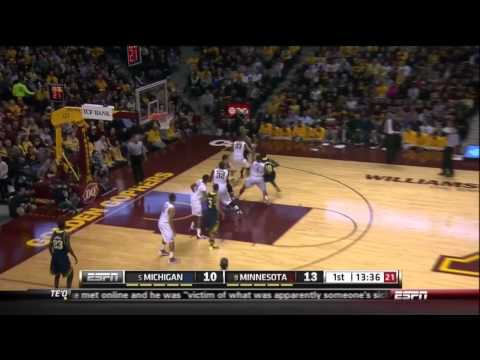 Tim Hardaway Jr. was spectacular in the first half, connecting on four triples in five attempts and racking up 17 points. However, this aggressive drive to the hoop might was one of the most important, even if unspectacular, plays of the first half. Hardaway only made one of the two resulting free throws but his drive to the basket drew the second all important foul on Andre Hollins, Minnesota’ scoring and assist leader. Minnesota coach Tubby Smith sat Hollins for the remainder of the half and Michigan turned a three point deficit into a six point lead by the break. Arguments can be made for or against sitting a player with two fouls, but no matter how you slice it, not having Hollins on the floor hurt the Gophers. Smith looked to Maverick Ahanmisi first and the Gopher guard promptly turned the ball over twice before Smith went to Julian Welch, who did play well off of the bench. Still, not having their best player for 13 minutes of the first half was a critical blow to the Gophers.

At first glance it appears that Hardaway just puts the ball on the floor and drives straight to the basket for a simple drive. However, further review of the video shows Hardaway making a subtle heads up play. Michigan’s most experienced guard drives directly behind Mitch McGary’s backdoor cut. McGary’s back cut not only frees space at the top of the key, it occupies shot blocker extraordinaire Trevor Mbakwe and isolates him from the play in the lane. McGary’s big body acts as a shield for Hardaway, who is able to use his five inch height advantage to out-muscle Hollins to the basket.

Michigan’s offense was extremely efficient last night, scoring 1.3 points per possession, and the Wolverines put on a show offensively. They also grinded out a few offensive possessions for all too important garbage baskets. This provides the perfect lead-in to talking about Mitch McGary, Michigan’s proverbial x-factor in the first half. McGary came in for a struggling Jordan Morgan and made his presence felt immediately in his ability to make plays on both ends of the court. The first play in this sequence demonstrates exactly what McGary offers that Michigan has not had before under John Beilein — an effective offensive rebounder. McGary simply beats one of the best rebounders in the country, Trevor Mbakwe, for a ball careening off the rim after Tim Hardaway Jr. misses a 3-point attempt on the fast break. McGary corrals the ball and rips it from Mbakwe, who attempts to reach over McGary’s back. McGary somehow keeps his pivot foot planted and finds Trey Burke on the perimeter for the open 3-pointer. This was a huge play, with Minnesota having taken the lead a short time before. On the very next possession, McGary does what he’s done so well all season: anticipate passes to bigs on the perimeter and create steals. The freshman sees a lazy pass from Maverick Ahanmisi and takes advantage. On the third play of the sequence, Morgan gets stripped but keeps his head in the play, tracking down the loose ball. Spike Albrecht gets it to Hardaway, who knocks down the open 3-pointer. These plays not only showcase McGary’s versatility, but also Michigan’s ability to match Minnesota punch-for-punch in the first half.

During this stretch late in the first half,  Michigan got back to its bread and butter: transition offense led by Trey Burke. Looking at the first play in this sequence, we can see how Michigan was able to get out and run. Minnesota is a great offensive rebounding team, but crashing the offensive glass is always a gamble and is especially risky against the Wolverines. Here, Minnesota sent four players to the glass and when Glenn Robinson III grabs the rebound between two Gophers and gets the ball to Burke, Michigan is off and running. It’s clear, especially from these three plays, that perhaps the most important factor in Michigan’s transition success this season is the decision-making of Trey Burke; he just makes the right plays. On the first play, he shows how far he’s come in his alley-oop game, throwing a perfect lob to Tim Hardaway Jr. for the slam. Once again, on the second play of the sequence, Minnesota sends three players to the glass, leaving only two back to defend three Michigan players. Trey Burke displays uncanny timing, waiting for the exact moment Julian Welch commits to stop on a dime and dish the ball to Mitch McGary for an easy lay-in. On the third play, Burke makes it all happen. After a turnover, Burke swipes the ball right back from Welch and takes it all the way for an excellent finish at the rim. Burke had nine assists to just one turnover and smart decisions in the transition game were the driving force behind those gaudy numbers.

4) Michigan makes a decisive run midway through second half

Minnesota fans who feel like they got screwed by the officiating in this game may beg to differ, but this was the stretch of the game when Michigan put the game away. The Wolverines began this sequence up 11, they were already putting some distance between themselves and the Gophers, but they were far from running away with it. By the end of the 11-3 run, Michigan was up 19 and in complete control of the game. This run showed just how dangerous Michigan’s offense can be when it gets going, but it could just as easily be characterized as Glenn Robinson III and Nik Stauskas combining for a highlight reel. In the first play, we get a good example of the sort of action John Beilein talks about running for Robinson when people assert Robinson doesn’t get plays run for him. Mitch McGary sets an off-ball screen and takes Robinson’s defender completely out of the play — the help defense never has a chance to establish itself and Robinson finishes with an authoritative dunk. On the second play, Stauskas makes a great backdoor cut, receives an excellent pass from Burke and gets fouled going to the rim. Stauskas has bad intentions every time he drives to the basket and goes up strong, which is exactly how you get foul calls. After that it’s back to what Stauskas does best — knock down 3-pointers. The Canadian didn’t have a great shooting night — he was 1-of-4 from beyond the arc — but this showcased the sort of situations in which Burke talked about finding him after Ohio State: transition opportunities before the defense is set. And then, Michigan fans were treated to the sort of thing that’s been lacking from Michigan basketball since the Fab Five days — all-world athleticism. Glenn Robinson III locked down the number one spot on SportsCenter’s top plays with his interception returned for a “touchdown,” i.e. a 360 slam. It was a tough act to follow, but Stauskas thought he’d get into the air show with a dunk of his own in traffic. When the dust cleared after the run, Michigan looked like the team on its way to winning this one.

5) Caris LeVert comes up big late in the game

All of Michigan’s freshmen seemed to have their moment on Thursday: Glenn Robinson III, Nik Stauskas and Mitch McGary obviously were big factors in the game, but both Caris LeVert and Spike Albrecht  made the most out of their limited minutes. While Albrecht spelled Trey Burke and came up with a nifty floater in traffic, LeVert’s contribution came at a point in the game when Michigan needed it badly. Rodney Williams had cut the deficit to just 10 points with plenty of time left and Minnesota had all the momentum. Levert stepped in and knocked down an absolute back-breaker of a 3-pointer off the pass from Burke. Just as the Gophers seemed to be coming back from the dead, that bomb was instrumental in keeping them at bay. On the ensuing Minnesota possession, LeVert, attempting to corral a loose rebound, got run over by Trevor Mbakwe. He went to the line and knocked down two huge free throws, completing a five-point swing that shifted the momentum back into Michigan’s favor. John Beilein said it best after the game: “Everybody had their little spot and that’s what can make this team good.” LeVert’s “spot” happened to come in the midst of a furious comeback effort by Minnesota, and he was instrumental in holding off the Gophers. Michigan couldn’t have asked for much better all-around production offensively, from its starters to the back end of the rotation, and it’s a big reason the Wolverines walked out of The Barn with a victory.