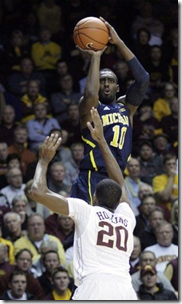 John Beilein downplayed it afterward but make no mistake about it: this was a pivotal win for his team. Michigan traveled to Minneapolis after a deflating road loss at Ohio State and beat No. 9 ranked Minnesota comfortably. Sure the Gophers scrapped back into the game but the visiting Wolverines made a clear and emphatic statement at the Barn.

For Minnesota, everything seemed to fall apart when Andre Hollins picked up his second foul with 13:55 to play in the first half. The Gophers led 13-10 when Hollins fouled Tim Hardaway Jr. driving to the bucket. From that point on, Minnesota turned the ball over seven more times in the first half and watched Michigan turn a small deficit into a solid six point halftime lead. Hardaway carried the Wolverine offense in the first half 17 points on 6-of-7 shooting.

Hollins would return in the second half but the damage was done and the Wolverines extended their lead to 19 points in a flash. Over the 20 minutes of clock time immediately following Hollins’s second foul – 13 of which he spent on the bench – Michigan outscored the Gophers 46-24 and never looked back. Minnesota fought its way back into the game late but was never able to legitimately challenge the Wolverines down the stretch despite a messy, free throw heavy, closing stretch.

Michigan’s offense is reaching scary levels of efficiency and its dismantling of Minnesota makes Ohio State’s defensive performance last Sunday even more impressive. The Golden Gophers don’t have the league’s best defense – far from it – but Michigan’s 1.30 points per possession were better than any team has managed against Minnesota since March 2010. Through five Big Ten games Michigan has scored 387 points on 317 possessions or 1.22 points per trip.

The best way to put that number in perspective: Michigan’s best offensive game in Big Ten play last season was 1.19 points per possession at Penn State.

Michigan’s shooting was phenomenal but its offensive attack was far more diverse than a simple hot shooting night. The Wolverines shot 58% on twos and 50% on threes for a 65% effective field goal percentage. Michigan turned the ball over on 19 percent of its possessions, rebounded just under a third of its misses, and attempted 25 free throws to 51 field goals.

The Wolverine offense isn’t just effective, it’s fun to watch. The attack featured a little bit of everything on the night. 19 of Michigan’s 28 makes were assisted, six of those makes were dunks and the bench produced 15 points. Michigan matched Minnesota’s 32 points in the paint but also knocked down 10 threes in a hearty 64 possession game. In a league maligned for hard to watch basketball, Michigan could be one of the most entertaining teams to watch in the country.

The three rules for playing Michigan are clear: don’t run, don’t crash the glass and don’t turn the ball over. Unfortunately for the Gophers, those three traits are ingrained in their DNA.

However, there’s still plenty of growing room for this Wolverine team on the defensive side of the ball. Minnesota scored 1.18 points per trip thanks to 8-of-16 three point shooting and dominant offensive rebounding. The Gophers rebounded 47 percent of their misses on the night – shockingly below their season average – and this was Michigan’s worst defensive rebounding performance of the season by a long shot. Haphazard ball handling cost the Gophers throughout the night. Minnesota turned it over on 24 percent of its possessions (35% in the first half) and Michigan converted those 15 Gopher turnovers into 24 points (22 in the first half). Michigan also struggled with fouls throughout, especially in the second half. The Gophers had a free throw rate (FTA/FGA) of 52% for the game but attempted 23 free throws to 29 field goals in the second half alone.

It was nice that Michigan forced turnovers but there’s not a lot to brag about with this defensive performance. Earlier in the season I questioned whether Michigan’s offense was good enough to win games in the Big Ten with an average-at-best defense. Games like this prove that might be possible – but defense would be a nice luxury.

At times it seems like one game can change everything but there’s no denying the validation in this win was something Michigan needed. Now the Wolverines take a weekend off before winnable games against Purdue, Illinois and Northwestern. Suddenly a 7-1 record feels possible before a murderer’s row stretch with games at Indiana, against Ohio State, at Wisconsin and at Michigan State in early February.