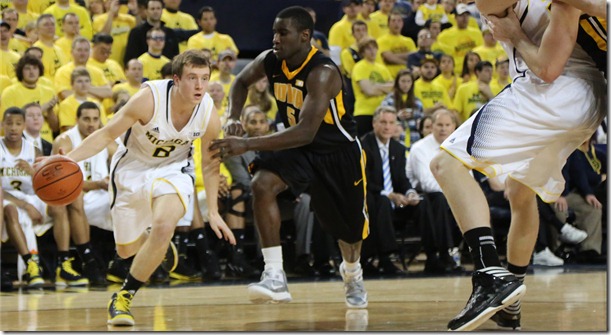 Michigan’s stellar point guard had an uncharacteristically inefficient game on the road against Ohio State and seemed to be pressing at times, especially in the first half. While he had a 3-pointer for the lead drop halfway through the hoop in the waning minute of the game, Burke still needed 13 shots to tally 15 points and paired his four assists with four turnovers. However, against Minnesota, Burke was back to his old self. While he still didn’t shoot very well — 5-of-15 from the field — Burke dished out nine assists to just one turnover.

Hardaway experienced the toughest shooting night he’s seen in a while on the road against the Buckeyes, making just one of his six long-range shot attempts. The junior stepped up his game in a big way in the second half and was a big part of Michigan’s comeback effort, but he still shot just 33 percent from the field for 13 points. Like Burke, though, Hardaway was back to his old ways against the Gophers. The swingman was shockingly efficient from the field, hitting seven of his eight shot attempts, including four of five 3-pointers. While he turned the ball over six times, he still grabbed five rebounds and dished out three assists.

McGary was one of the few Wolverines who produced against Ohio State, hitting all three of his shots and swatting two of the Buckeyes’. The freshman continued his upward swing against the Golden Gophers on Thursday, providing Michigan with a much-needed spark off the bench. The Chesterton native was 4-of-5 from the field (including a lefty hook as well as a 10-foot jumper), grabbed two rebounds, forced three steals and registering a block. McGary continues to improve and will likely see his role on the team expand if he keeps up this sort of production.

After appearing to be mostly an afterthought in the rotation the week prior, Albrecht asserted his essential role on the team against Ohio State. The point guard spelled Trey Burke in the first half and was likely the only reason the Wolverines were able to claw their way back into the game. Albrecht scored seven points, four of them at the line, and knocked down a huge 3-pointer against the Buckeyes — overall, the freshman looked poised and unafraid. In just seven minutes against Minnesota, Albrecht scored on a nifty floater off the glass and dished out two assists.

The offensive numbers Robinson put up against Ohio State and Minnesota were both eerily similar and not all that impressive. In both games, he went 3-of 8 from the field. Against Ohio State, he scored eight points; against Minnesota, nine. However, while Robinson was mostly a non-factor against the Buckeyes, few could say the same about his play against the Gophers. Robinson’s night at The Barn was packed with highlights, including a 360 dunk and a big-time 3-pointer late in the game — not to mention the five boards he dragged down. Robinson is still learning how to produce in the Big Ten, but he seems poised for a big offensive game.

While Jordan Morgan wasn’t particularly effective against Ohio State, he was efficient — he didn’t miss either of his two shots and grabbed six rebounds in 22 minutes. Against Minnesota, Morgan struggled mightily against the athleticism and shot-blocking ability of Trevor Mbakwe in the first half, but righted the ship at halftime. In the second frame, the redshirt junior sank all four of his shot attempts to end up with nine points, including a few at the rim against Mbakwe.

Ohio State did an excellent job of taking Nik Stauskas completely out of the game, forcing the freshman into missing all three of his shot attempts. It was the first time in his career at Michigan that Stauskas went scoreless, and it was the first time since his first official game against Slippery Rock that he was held below double digits. Stauskas rebounded somewhat against Minnesota — while the Canuck went 1-of-4 from beyond the arc, he made both of his twos, one a dunk in traffic.

LeVert looked a little bit in over his head against Ohio State and did not register any points, missing his only shot attempt as well as both free throws to go along with a bad first half turnover. However, in the second half against Minnesota, the freshman made the most out of limited minutes: he scored five points in just five minutes, including a 3-pointer at about the 6:30 mark that helped extend the Michigan lead late.