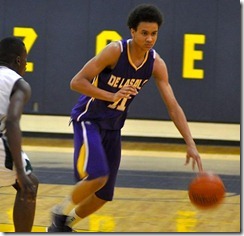 It was an up and down night for Turner, one of the fastest rising names on Michigan’s 2014 recruiting board, as his team suffered a loss to Douglass. Early on it looked as if De La Salle would cruise to an easy victory as the Pilots extended their lead to as many as eight points.

Turner, a 6-foot-7 combo guard, split time between the point and off guard positions and was playing well despite struggling from the floor early on – missing five of his first six shots. He demonstrated his ability to put the ball on the floor and create his own offense. He was 4-4 at the stripe in the first half, scoring nine of De La Salle’s 24 first half points.

In the third quarter, Turner’s confidence grew as he ran the Pilots’ offense to perfection extending their lead to eight points entering the fourth. He showed improved ball handling, and was an impressive facilitator while always making the correct pass that led to easy baskets. Turner was as impressive defensively, showing the ability to guard any position on the floor from one through five.

Douglass began to make a run in the fourth quarter and the wheels fell off for De La Salle. When the game was on the line, Turner became the full-time point guard and started to stray from some of the areas where he was so successful early in the game. He began to force the action just enough that it allowed Douglass to escape with a come from behind victory.

Turner struggled with turnovers and didn’t make a shot in the fourth quarter, finishing with 12 points on 2-for-11 shooting for the night as De La Salle fell to Douglass 51-46. 2014 guard Darrell Davis led the way for Douglass in the victory, pouring in 16 points.

On the whole, Turner was frustrated with his performance and wants to strive to be more aggressive with the ball.

“I think I could have been a little more aggressive. They sent a couple defenders at me when I was dribbling,” he explained. “I think the team, they outplayed us, they out-hustled us, they got more offensive rebounds than we did. They just did more things right than we did tonight.”

Despite the loss, Turner showed tremendous athleticism, and was fantastic in the open floor. He said he’s still working on ball handling as he gets more experience at the point, and wants to become a more versatile player. He still needs to put on more weight and become a better rebounder, but he’s a great floor general and at 6-foot-7 will be tough to guard as he fills out, and develops his game.

Jaksic and Walled Lake Western had their hands full against Cass Tech, failing to score a point in the first quarter against the Technicians tenacious full-court press.

Jaksic drew a lot of attention every time he touched the ball, and couldn’t get into an offensive rhythm at all. Walled Lake Western didn’t convert a field goal until just 4:30 remained in the second quarter when the 6-foot-11 Serbian scored his first two points.

The versatile big man was never able to find a groove in the game on either end of the floor as he finished with 12 points and four rebounds in the 21 point loss. Jaksic demonstrated a great offensive skill set with an impressive array of back to the basket moves but needs to continue to develop his consistency on both offense and defense.

Jaksic isn’t the only player, though, that Cass Tech has made look bad this season. The Technicians improved to 10-1 this season, with their only loss coming at the hands of Michigan signee Derrick Walton and Chandler Park Academy, and each of Cass Tech’s wins have been by at least 18 points.

Jaksic demonstrated the skills and scoring ability that has schools like Michigan and Duke taking a look but will need to be able to produce on a night in and night out basis to rise up the recruiting boards of major schools. He needs to continue to fill out his frame and develop his basketball IQ while not allowing smaller opponents to dictate the way he plays the game.