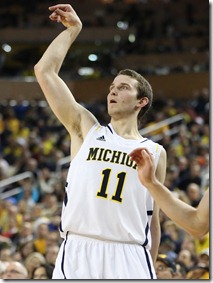 January is winding down, which means it’s time to re-introduce the UM Hoops Bracket Watch. Michigan finds itself in a somewhat unfamiliar position this season: vying for a number one seed in the NCAA tournament. The conference season is still young, but it’s not too early to project possibilities of where the Wolverines will land come tournament time.

Michigan is coming off of perhaps its biggest win of the season, on the road against then-No. 9 Minnesota. The win puts Wolverines back into a strong position to grab a No. 1 seed in the tournament and that’s where most bracketologists are projecting John Beilein’s team. If Michigan continues its strong play, the Wolverines are also almost certain to draw opening round games at the Palace of Auburn Hills, just 55 miles from Ann Arbor.

After the jump, check out what bracketologists are saying about Michigan, as well as in in-depth look at the Wolverines’ resume and case for a No. 1 seed. You’ll also find assessments of other Big Ten teams with as many as seven projected as potential NCAA tournament teams.

Every team wants to see a #1 by its name on Selection Sunday but is it worth it for a team like Indiana or Michigan to get shipped to the West Region? A trip to Indianapolis as a No. 2 seed seems a whole lot more intriguing than a trip to Los Angeles as a No. 1 seed with a west coast team – Arizona perhaps? – as the two seed in the same bracket.

Duke appears destined for Washington D.C. while Kansas is the prohibitive favorite to earn the No. 1 seed at Cowboys Stadium. Michigan, Louisville and Indiana are all likely to fluctuate around the 1 and 2 seed lines until Selection Sunday and all three schools will be hoping to see their names in the Midwest Regional.

In Jerry Palm’s latest bracket Michigan is just a No. 2 seed but finds itself paired with Syracuse as a No. 1 seed in the Midwest. That outcome might be preferable to Andy Glockner’s bracket which has Michigan as a No. 1 seed paired with Arizona in Los Angeles. Early on, this is the storyline to watch for bracketing purposes as things play out over the next two months until the brackets are announced.