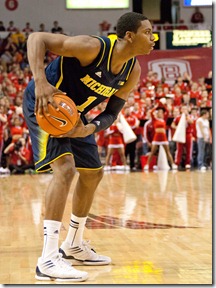 Following Michigan’s big road victory at Minnesota, the Wolverines faced something they hadn’t seen since before Christmas: a long layoff. With a six-day break between games in the midst of the Big Ten season, Michigan got a chance to rest up after two straight difficult road match-ups.

The break wasn’t just useful for resting; John Beilein said his team was able to revisit some fundamentals and “work on Michigan,” as opposed to game-planning for other teams.

“When you have the games during the season, if you play two games a week, it’s really hard to get back to basics because you’re always trying to rest after one game, and trying to get ready for the next game,” Beilein said. “We went back to just playing defensive principles – and offensive principles. We had one defensive practice and we had one offensive practice. Just to get back to things that had fallen behind a little bit and things we haven’t put in yet for an offensive team.”

While it’s essential for teams to keep their focus on the upcoming opponent and learn their tendencies, it is equally important for them to shore up any weaknesses that may emerge as the season goes on.

The fact that Michigan has five freshmen who play significant minutes makes it even more urgent for the coaches to revisit offensive and defensive basics mid-way through the season.

“We had to get back to some basics. There’s scouting reports, then there’s just the fundamentals,” Beilein said. “Sometimes you can get so into scouting reports that you’re playing the play instead of playing basketball. That’s a fine area we’ve got to watch.”

The layoff also provides an opportunity for the young players to show how far they’ve come. Beilein mentioned Nik Stauskas as someone who is doing things in practice he couldn’t do “just a week ago.”

Jordan Morgan appreciated the time off because it afforded the team an opportunity to focus on themselves and recharge for their game against Purdue Thursday night.

“We were able to just focus on Michigan and getting better as individuals and as a team, too,” Morgan said. “And then get some rest in after that and focus on this next game coming up.”

Is revenge a motivator after disappointing Senior Night loss?

Last season, Purdue was on Michigan’s schedule as the Wolverines’ last home game: Senior Night. But it wasn’t just an opportunity to send off beloved seniors Zack Novak and Stu Douglass off right; the game had major implications for Michigan’s Big Ten Championship hopes.

The Wolverines, who by that point had already locked up a good seed in the NCAA tournament, came out flat against the Boilers, who were desperately playing for a spot in the Dance. Purdue won the game, easily, and despite the fact that Michigan ended up winning a share of the Big Ten title anyway, the loss stung.

Jordan Morgan said that although the loss hurt in the moment, it isn’t something Michigan is focusing on going into Thursday’s game.

“We haven’t necessarily talked about it like that. When you think about it, it was kind of a demoralizing loss. We were pretty upset after that loss,” Morgan said. “We haven’t put too much thought into it. It’s more just about this game right now and what it does for us right now, rather than what happened last year.”

John Beilein highlighted the fact that during his time at Michigan, the Wolverines have particularly struggled against Purdue. Michigan has beaten the Boilermakers just twice during Beilein’s tenure.

“Purdue has really played us tough over the years since we’ve been here,” Beilein said. “Their defense, they’re physical, they’re an excellent, excellent team. Barring injuries and bad breaks, they’re another NCAA team in the Big Ten that will be visiting us.”

Purdue has struggled at times this season, including a tough loss to woeful Eastern Michigan. With that being said, the Boilermakers have won three straight games and are coming off an absolute beat-down of West Virginia at home.

Beilein remains open to ideas for motivation. When asked if he had told the team to win this one for Novak and Douglass, who didn’t get the win last season, Beilein didn’t rule it out.

“We haven’t done that,” Beilein said. “Maybe we should do that.”

Michigan has been hauling in individual awards from the Big Ten (player of the week, freshman of the week) by the truckload this season.

Of the 22 individual awards the Big Ten has handed out this season, a Michigan player has won nine of them. This includes the latest, Tim Hardaway Jr.’s Big Ten Player of the Week award last week.

While the Big Ten promptly sends out these awards on Monday each week, it seems Michigan players get word of them a bit later than others.