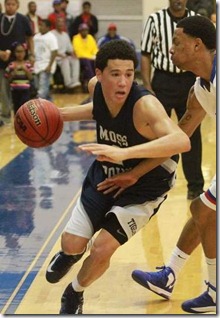 Devin Booker, a five-star 2014 guard prospect being heavily recruited by Michigan, has heard the knock on him and his Moss Point teammates. The teams up north in Jackson say that Moss Point doesn’t play anyone. They say Booker may be good, but just wait until he plays the competition around the capital city.

On Monday, that’s just what Booker did. The Grand Rapids native led his team up to Jackson to play Greenville-Weston High School. In a gym crowded with high-major college coaches, Booker scored 34 points in a 63-60 Moss Point victory. (Photo: Chip English)

“They (players in Jackson) have no respect for the competition all the way in the bottom of Mississippi. They always say I’m not playing against anybody down here. To go up there, we all have a chip on our shoulder, you know?” Booker said in a telephone interview Wednesday. “They always hear about me, so they just want to stop me. Every time we go up there, everybody’s rooting against us. Every time we go up there, they always give us their best shot, so winning feels good.”

However, Booker didn’t just win — he won with style. The junior swingman got out on the fast break, took the ball to the hoop and posterized a Greenville-Weston defender.

I asked Booker is the dunk had a little something extra behind it, given some of the talk he’d heard before the game about his competition.

Included in those who enjoyed the show put on by Booker and his teammates were three Michigan coaches — John Beilein, LaVall Jordan and Bacari Alexander. Michigan is clearly putting on the full-court press in an effort to sign the talented wing scorer.

Booker has had a monster season so far despite being the star of a young team that lost a lot of senior leadership last season. Booker has faced constant double-teams and box-and-1 defenses, leaving him to create for his teammates instead of score.

“At the beginning of the year, it was frustrating. My teammates were getting wide open looks and not finishing. My dad always says that’ll make me better,” Booker said. “But as a leader, I have to get the young kids involved and give them the confidence to actually score. I think that’s something I’ve been doing pretty well lately.”

The results during the earlier portion of the season were disappointing, but Moss Point has recently reeled off three straight wins, including the big one over Greenville-Weston. Booker’s team currently holds a 9-12 record.

Personally, Booker is averaging 29 points per game despite opposing teams keying on him constantly. While this summer it seemed like Booker’s recruitment was largely a two-horse race between Michigan and Missouri, the resulting attention has led to more schools becoming interested. Booker said he’s seen Stanford, Florida, LSU, Mississippi State and Michigan State at his games alongside Michigan.

But there’s one big new player in Booker’s recruitment: Duke.

“Duke started around Christmas. I was talking to an assistant coach on really an every-day basis, texting back,” Booker said. “Then Coach K called the day after Christmas and we talked I think like two or three times after that. They’re picking up a little bit.”

For Michigan’s part, John Beilein has been recruiting Booker long since his summer circuit explosion, when he was just an unheralded freshman in Grandville. Booker said that while Michigan has been heavily recruiting him since the Wolverines offered him this summer, the college season has brought fewer calls.

“(Recruitment) has slowed down during the season just a little bit. Obviously I respect them being a powerhouse this year, so I understand Beilein’s trying to focus on getting wins. And then on my end, I’m trying to focus on the same thing, getting wins,” Booker said. “My recruiting from everybody slows down a little bit during the season. I don’t hold anything against any schools if they slow down because they’re focusing on getting wins. If I’m in college, I want the coach doing the same thing with me.”

Michigan maintains contact, but Booker said he’s been talking to the coaching staff for so long that now the subject matter of their conversations revolves around his high school season and how his family is doing.

Booker has watched a few Michigan games this season and is blown away by how well the Wolverines have played.

“This year, they’re playing intense. I love watching Trey Burke play,” Booker said. “I know I’m not a one, but I just love his game, and I always have, ever since he’s been there. And I also like Hardaway. That’s more my position, playing off the ball.”

Michigan’s main adversary in Booker’s recruitment over the summer was Missouri. Melvin Booker, Devin’s father, played at Missouri in the early 90’s. However, the Tigers’ basketball program has fallen under scrutiny lately because of head coach Frank Haith’s alleged involvement with the booster Nevin Shapiro.

Booker said he didn’t know much about the allegations, but had heard about the issues.

“I don’t know how the whole thing is going to play out. Obviously if the whole coaching staff goes away, that will affect me, them being the ones who have been recruiting me,” Booker said. “People always ask me about that Missouri thing now, but I’m just going to see how it plays out.”

Booker does not yet have a timetable set for making a decision. He said he has no visits planned yet, though he said he has talked to Duke and Florida about visits after his high school season.

For now, Booker is enjoying the process and taking his time in making a decision.

“The process, it can get frustrating sometimes with so many schools and people asking me, but it’s a good problem to have. Probably the best problem to have,” Booker said. “It’s better than not having any schools. As of now, I’m just taking it through the end of our season.”