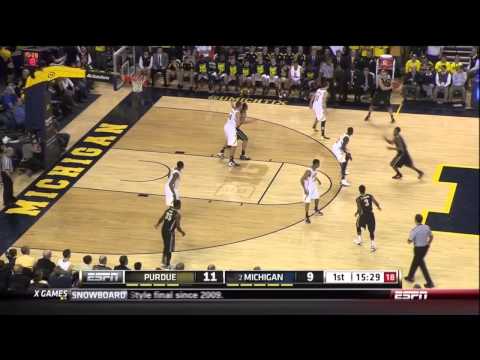 Purdue walked into the Crisler Center Thursday night on fire. The Boilermakers were taking 3-pointers from all over the floor and seemingly couldn’t miss. By the end of the first half, Purdue had made six out of 11 attempts from deep. The Boilers scored 33 points in the first frame and 54 percent of that production came from beyond the arc. Two of those 3-pointers came as a result of long offensive rebounds, plays when, as John Beilein described it, “inside position probably wasn’t the best position.” There were a few times when Michigan’s defense was lacking an Purdue was left with wide open looks. On Purdue’s first 3-pointer from Terone Johnson, Nik Stauskas is late fighting through a screen; Raphael Davis’s open look in the corner was a result of Tim Hardaway Jr. selling out on help defense and leaving that side of the court unguarded. Most of the other long-range bombs, including one that DJ Byrd shot from somewhere outside the city limits, were hotly contested. Purdue simply couldn’t miss to start the game, and they regressed to the mean in the second half, not hitting a 3-pointer in the latter frame. Michigan rode out the barrage, and going into halftime down one against a team shooting like that is a testament to Michigan’s ability to keep pace with the Boilers’ outlandish shooting.

At around the 7:30 mark in the first frame, Michigan was down five and looking for offensive answers to Purdue’s unreasonably hot shooting. They came in the form of three crucial plays that got the Wolverines back on track and boosted their confidence. The first play was something we’ve seen more of during the Big Ten season: curl plays for Nik Stauskas on the wing. This is part of the creative effort to get Stauskas open for looks now that Big Ten defenses are keying on his 3-point shooting. Stauskas can do a lot more than just shoot, and running action that gets him open is essential to the lethal diversity of Michigan’s offense. On this particular play, Mitch McGary positions himself at the elbow/free throw line extended and sets an off-ball screen for Stauskas. One of the cool things about this play: if defenders try to cheat and jump the screen, Stauskas can cut back door for a layup. Stauskas curls around the screen and receives the ball as he’s curling so that he can keep his momentum going toward the basket. Purdue actually played pretty good defense on this play, with the big helping on Stauskas and Stauskas’s man taking McGary. But the freshman does a nice job using his body to shield the ball and his length to finish. Michigan’s other two plays in this run came off transition opportunities that resulted from strong rebounding and terrific outlet passing. In both plays, Trey Burke does a nice job of positioning himself in places where he can easily receive the ball and make something happen. The second play probably shouldn’t have been a transition bucket because it took so long to develop, McGary makes an excellent outlet to Burke, who’s already past half-court. Burke has a 3-on-3 situation but expertly takes one defender out of the play when the defender over pursues on Burke. The point guard dumps the ball to Glenn Robinson III, who finishes with the reverse.

Trey Burke, Trey Burke, Trey Burke. Michigan’s point guard made this run happen. While most of the time, other players were finishing the plays, everything started with Burke’s ability to penetrate and draw defenders, followed by his world-class vision. We can list them off just to illustrate Burke’s integral role in each play: First, he finds Glenn Robinson III wide open for a 3-pointer after drawing his defender driving to the hoop; Stauskas curls around another screen off an inbounds play and Burke finds him under the basket; Burke takes matters into his own hands with a dizzying hesitation move that completely loses two defenders and a finish in traffic at the rim; Burke forces a rushed pass from Anthony Johnson after poking the ball away twice, resulting in a steal by McGary and subsequent foul on Purdue; finally, Burke finds Robinson at the 3-point line after penetrating — again. Burke has never been more the engine that makes Michigan’s offense go than he was during this stretch that essentially decided the game. However, we would be remiss if we didn’t mention the frenzied effect Mitch McGary seems to have on the crowd at the Crisler Center. In the first half, it seemed like every time Michigan made a play, Purdue came back with a 3-pointer, keeping the crowd enthusiasm to a minimum. McGary made sure the crowd stayed on its feet after he got fouled on the steal. John Beilein seemed to have a sense of humor about it after the game, saying, “I love what he’s bringing to the team, whether it’s diving on the floor, going after something, or talking to the crowd, enhancing the crowd spirit. He’s really good at all of them.”

For a brief stretch during the final stretches of this game, Michigan fell asleep. Starting with about nine minutes to go, the Wolverines missed a couple shots,  threw the ball away a couple times and committed a silly foul. During this period, Purdue went on a 6-0 run that cut an 11-point lead to just five. Michigan was looking for a spark to ride through the end of the game, and lo and behold, Nik Stauskas provided. I just love this play. This is a perfect example of what John Beilein means when he talks about how spacing is crucial to what Michigan runs. Mitch McGary sets a screen for Trey Burke at the top of the key. Burke uses the screen, and from there he has a few options, depending on how he reads the defense. He can go all the way to hoop himself, he can dump the ball to a rolling McGary, or he can pass the ball to Stauskas on the wing. Which option he chooses depends on where the Purdue defenders are. If AJ Hammons stays at home on McGary, Burke can take it to the rim and either get the layup or the probable foul; in this case, Hammons turns his back to McGary and commits to Burke, which means Burke could dump it off to McGary. However, DJ Byrd, covering Stauskas, helps on McGary. What makes Burke so good is his instant recognition of this. If he dumped it to McGary, the ball likely would have been stolen by Byrd. Instead, Burke makes the correct play, passing a perfectly-positioned, wide open Nik Stauskas on the wing. Stauskas, of course, knocks the shot down and from there Michigan is home free.

5) Mitch McGary gets aggressive in the second half

During conference play, it has seemed in nearly every game to simply be a matter of time before Mitch McGary makes his presence felt. In the first half, though he was active around the basket, McGary had some difficulty finishing around the rim. After the game, McGary said he “slowed down” in the second half and it showed. He was more confident with the ball and stronger at the rim. On the first play, he is the beneficiary of yet another terrific pass from Burke. This edition of Five Key Plays has been something of an ode to Trey Burke but what else can you say. Look at the way he stops his defender with his body — in the middle of the lane, keeping his dribble alive — and shields the ball. Finally, when McGary’s defender has no choice but to commit to Burke, Burke makes a perfect pass to McGary, who finishes with his left hand. On the second play, we see McGary running the floor after contesting a 3-point shot. He’s rewarded with a pass from Tim Hardaway Jr. and finishes with the transition dunk. Then on the third play of the sequence we see McGary with some one-on-one action, taking the ball straight to the rim over his defender. He goes up very strong on this play, simply moving Hammons out of the way and finishing high. It’s clear from these plays McGary is only now tapping into his potential. He played more minutes than Jordan Morgan in this game, but John Beilein said there are no plans to start McGary over Morgan at this point.