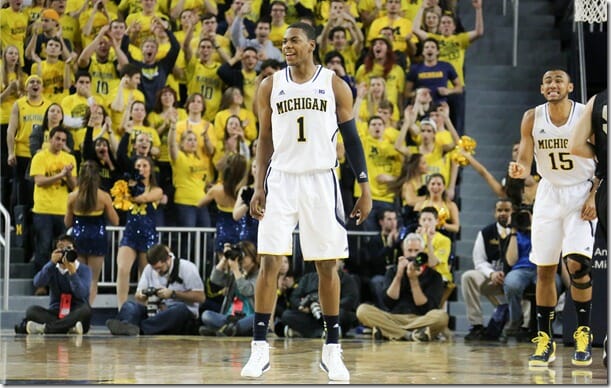 Purdue took the floor in Ann Arbor and did just about everything correctly for 20 minutes. Matt Painter couldn’t have asked for much more from his young and inexperienced team playing on the road against the nation’s No. 2 – perhaps soon to be No. 1 – team. The Boilermakers shot the lights out from three point range, forced Michigan turnovers and appeared to be out hustling the more highly regarded Wolverines. In spite of playing to its potential, one could argue well beyond, Purdue led by just one point at the half time buzzer. That lead would never be enough and Boilermakers’ fate was sealed.

Inevitable regression toward the mean set in during the second half and the Wolverines steadily pulled away. The hot three point shooting evaporated (Purdue didn’t make a second half three) and the result was all but determined midway through the second half. Michigan didn’t play its best game and it didn’t play its worst. After 19 games it’s clear that an average performance from the Wolverines is more than enough to beat most opponents – especially within the friendly confines of Crisler Center.

Purdue deserves credit for slowing things down and limiting the game to just 58 possessions. Michigan did find a few easy buckets in transition but those were usually followed by a Matt Painter timeout and verbal sideline lashing. Michigan’s offense didn’t struggle by any means but still wasn’t its most efficient self. The Wolverines checked in at 1.17 points per possession which is just a few marks short of their league leading average Big Ten offensive output of 1.20 points per trip.

Michigan shot the ball well – 51% on twos and 44% on threes – and dominated the offensive glass to top things off. The Wolverines grabbed 40 percent of their missed shots and scored 13 second chance points. Michigan would be a pretty good team with its offensive weapons alone but it’s becoming clear that the Wolverines are a legitimate offensive rebounding team. With the number of shooters and finishers scattered across the floor, surrendering offensive rebounds to John Beilein’s team continues to be something like throwing gasoline on the fire.

There are probably a handful of things that you could nitpick from Michigan’s offensive performance. Maybe the uncharacteristic first half turnovers or an off shooting night by Trey Burke, but doing so would be a bit foolish. This was still a great offensive performance despite those nitpicks and the Wolverines per possession output was still worlds (by .07 points per trip) above the average output of the league’s second best offense.

For one of the first times this season, a Michigan win had more to do with defense than offense. The Wolverines’ first half defensive effort was nothing short of wretched. Purdue shot 54% on threes, rebounded 36 percent of its misses and seemed to score at will. Michigan addressed those issues and then some in the locker room at halftime and then managed to shut down the Boilermakers.

Purdue is far from a great offensive team but it was nice to see the Wolverines make adjustments and lock down defensively.

The math gods certainly cackled at Purdue’s 0-of-9 second half three point shooting as it brought Boilermakers numbers to 7-of-21 from long range or 31.8% for the game – two tenths of a percentage away from their season average. Ken Pomeroy has clearly articulated the randomness of three point defense but there were still notable improvements to the Michigan defensive effort beyond the missed threes.

The most notable improvement was on the defensive glass where the Wolverines rebounded 76% of Purdue’s misses in the second compared to just 59% in the first. Michigan also snatched twice as many steals, not only forcing more turnovers but converting them into 11 second half points off of turnovers compared to just two in the first.

It might not have been as gaudy as some of Michigan’s early league wins but it was another solid and comfortable victory. A 15 point win in a 58 possession game is far from a shabby victory. Michigan’s first five Big Ten wins have come by an average margin of 18.8 points per game, a year ago when the Wolverines shared the conference crown just two of their 12 wins were by more than 12 points. Next up is a trip road trip to face a struggling Illinois squad that has lost five of its last eight games. Win on Sunday night and Michigan is likely to secure its first No. 1 ranking in over 20 years.