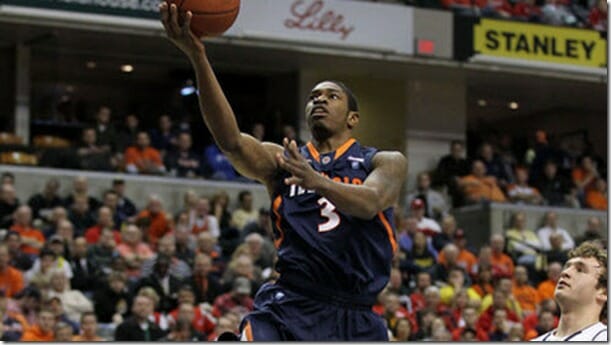 Just 10 months ago, John Groce ended Michigan’s season. He took an Ohio University team with a mediocre (even by MAC standards) offense and a great defense and shocked the Wolverines in Nashville. The loss ended Michigan’s season with a whimper while Groce would move onto bigger and better things. Michigan has only lost one game since then while Groce is now in charge at Illinois in the middle of an up and down inaugural campaign.

The narrative of John Groce’s first season has changed dramatically from an impressive 12-0 start with featuring impressive wins over Butler and Gonzaga to where it stands now; 15-5 (2-4 B1G) and losers of five of eight. The trend feels reminiscent of Bruce Weber’s fateful final season saw the Illini start 10-0 and then dwindle to 15-3 all the way to 17-15. Hope has turned into faint grumbling in Champaign as Illinois enters the middle of a treacherous Big Ten schedule in which Ken Pomeroy gives the Illini a 50 percent chance or better of winning just more three of its final 12 games.

Offensively, Illinois lives and dies by the three point shot. 42% of Illinois’s field goal attempts originate from beyond 22 feet and the Illini lead the league in 3 point attempts per field goal attempt – an impressive feat in a league featuring traditionally perimeter oriented teams like Northwestern and Michigan. Given that reliance, the culprit for Illinois’s recent regression should come as no surprise: three point shooting. In their last five losses the Illini are just 26-of-116 (22%) from three point range. That lack of a three point punch has crippled the Illinois offense which has failed to surpass 1.00 point per possession in any of those five losses.

The Illinois offense isn’t great at much else, but doesn’t have many glaring weaknesses either. Illinois doesn’t get to the line often but doesn’t turn the ball over much as well while doing an average job on the offensive glass. The high risk high reward strategy can be potent as the Illini are tough to beat when they are hitting their threes. Illinois ranks fifth among Big Ten games, rebounding one third of its misses in conference play but the majority of that offensive production was against Northwestern and Nebraska.

The Illini defense has been exposed in the last month. Six of Illinois’s last eight opponents have scored over a point per possession as both Minnesota and Wisconsin were both ruthless in their dismantling of the Illini, both surpassing 1.19 points per trip. Once again, Illinois’s problems revolve around the three point shot as Big Ten foes are shooting 38% from long distance. Unfortunate three point defense hasn’t done any favors for an Illini defense that struggles on the defensive glass and fouls far too often. Big Ten opponents are rebounding a third of their misses (9th) against Illinois and shooting 44 free throws for every 100 field goal attempts (11th). While defensive aggressiveness has yielded too many free throw attempts, Illinois has forced more turnovers in league games than any other Big Ten team.

Brandon Paul uses 29.6% of Illinois’s offensive possessions, and has improved his efficiency from a season ago, more than anyone in the league other than Penn State’s DJ Newbill. The 18 point per game scorer attempts half of his field goals from three point range, where he connects at 34%, but also does a great job of drawing fouls when slashing to the bucket. Paul will get his points but making him work for them is the key. The 6-foot-4 senior has just a 42% effective field goal percentage in losses compared to 53% in wins.

Tracy Abrams handles point guard duties for the Illini and he’s much improved but is still an underwhelming offensive player. Abrams connects on 52% of his twos but just 28% of his threes and is a decent setup man but has the same number of turnovers (19) as assists in Big Ten games.

D.J. Richardson and Joseph Bertrand are the primary wing threats and also John Groce’s most efficient scorers. Richardson has been fairly consistent over the course of his career, averaging 31 minutes and 10 points per game over four seasons, but has never taken that next step. He’s coming off of a 30 point explosion against Nebraska (including 6-of-9 three point shooting) but was very cold from three point range before Nebraska, making just 12 of his previous 55 attempts. Bertrand is the best defensive rebounder on the Illini roster and the 6-foot-6 wing is great attacking the basket as well, finishing 59% of his twos. He’s also added the three point shot to his repertoire, shooting 39% after making just three triples during his freshman season.

The Illini interior presence of Nnanna Egwu, Tyler Griffey and Sam McLaurin is far from the most imposing in the league. At 6-foot-9, Griffey attempts over half of his shots from three point range. Egwu, 6-foot-11, 235 pounds, is a great shot blocked but only connects on 47% of his interior looks. McLaurin rounds out the trio and is limited offensively – both in usage and production.  All three players are underwhelming defensive rebounders with defensive rebounding rates of 13% or lower.

Illinois finds itself in a precarious situation in matching about against Michigna. The Illini like to run, averaging 65 possessions per game in Big Ten play — more than every school other than Indiana and Iowa. Illinois is an average offensive rebounding team and well below average on the defensive glass. The Wolverines should be able to win the battle on both backboards and force the tempo. It’s well documented what can happen when opponents try to run with the Wolverines and can’t hold their own on the glass. If Michigan can avoid turning the ball over, this could be an explosive offensive performance for John Beilein’s squad.

But this game feels critical for Illinois. A win could revitalize a frustrated team headed into a rigorous stretch that features games at Michigan State and Minnesota with home contests against Wisconsin and Indiana sandwiched in between. At 2-4 in the league, Illinois needs quality wins. Going 1-4, or even 2-3, in that stretch could doom the Illini’s NCAA tournament hopes quickly. Michigan’s work won’t be easy as it travels to a hostile venue to face a coach that certainly knows how to game plan against John Beilein’s offense. Ken Pomeroy likes Michigan by eight, with a 77% level of confidence, but this feels like a game that won’t come easy.