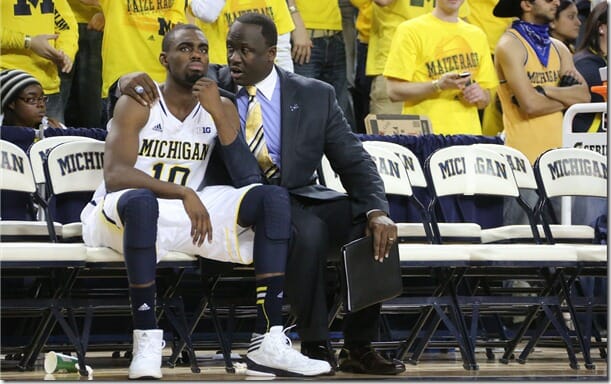 Almost nothing is certain in this year’s Big Ten — it seems as though any team can be beaten on any given night. However, there is one thing Michigan can be sure of when facing Illinois on Sunday in Champagne: the Illini will be ready to fire from three point range.

It didn’t always used to be this way for Illinois. But with the departure of Meyers Leonard to the NBA combined with the philosophy of new head coach John Groce has brought about a different playing style than the one employed by Illinois former coach, Bruce Weber.

"They’re certainly shooting the three point shot a lot more than they have in the past. But I think that also, when Bruce was there, they had, between Mike Davis, [Mike] Tisdale, and then … Meyers Leonard, you have to play differently when you have those three big guys that he’s had," John Beilein said during a teleconference on Saturday. "[Nnanna] Egwu is certainly a very talented player, but he’s still young. They’re more perimeter than they were, because their personnel is different."

The numbers bear out Beilein’s assertion that Illinois has become more perimeter-oriented. Specifically, the Illini have become heavily reliant on the long-range shot. A year ago, Illinois attempted 35 percent of its field goals from three point range. This year, the Illini are shooting 42 percent of their field goals from long distance. Illinois has gone from the seventh most three point happy Big Ten team to the most perimeter oriented in just one season.

Unfortunately for Illinois, taking more threes hasn’t necessarily translated to making more threes.  The Illini have made 165 of their 491 attempts for a so-so 33 percent success rate. For comparison’s sake, Michigan has made 161 threes on just 393 attempts.for 41 percent.

The Illinois players attempting the most threes are the talented seniors in the starting lineup: Brandon Paul and DJ Richardson. The duo has combined to take 273 threes and both players shoot in the 33 to 34 percent range.

"Both of those young men are terrific players. Both of them are capable of getting to 20 and Paul’s even gotten 30 in the past. Just the Nebraska game could show you Richardson, how explosive he is," Beilein said. "I think that a lot of Big Ten teams have one player like that out on the court much of the game — it’s rare that they have two guards who can get you between 20 and 30. Great quickness, really good players, and they’re doing a heck of a job right now putting them in the right places to score."

While Michigan encountered some trouble guarding the three point shot in the first half against Purdue, it’s safe to say that was mostly due to tremendous individual shooting by the Boilermakers than any significant defensive failure on the part of the Wolverines.

Beilein referenced the second half of the Purdue game as the standard for guarding shots from beyond the arc against Illinoi.

"I hope we do as good a job on those two as we did on Byrd in the second half," Beilein said.

During Michigan’s game against Purdue on Thursday, the Wolverines started the contest with the freshman Nik Stauskas matched up with Purdue’s DJ Byrd. Byrd had a great first half, scoring 11 points.

In the second half, Tim Hardaway Jr. took the assignment. The junior shut Byrd down as the Purdue sharpshooter didn’t score another point the rest of the game.

This is just one example of a season that has featured a new focus on defense from Hardaway. The focus this year on Hardaway’s play has been his improved all-around offensive ability, but one could argue his defense has made a similar sized leap. While being an improved on-ball defender doesn’t always lead to statistical achievement, Hardaway’s last three games have been impressive: the Miami native has five blocks and five steals combined in that stretch.

John Beilein said Hardaway’s presence on defense is most felt in the way he helps out the freshmen and lets them know where they need to be.

"Tim was just like most freshmen defensively. That’s frankly why most freshmen have trouble getting on the court, because of defense," Beilein said. "We’ve certainly embraced that challenge of teaching them defense early, and Tim has taken over right where [Zack] Novak and [Stu] Douglass left off, where ‘not only am I guarding my man, but I’m going to help all the rest of you guys figure it out.’"

In the past, it seemed as though Hardaway’s defense lagged when he wasn’t hitting shots. Now, thanks to a more consistent effort, his defense has improved dramatically. However, Beilein said it isn’t just effort that’s made Hardaway the defender he is now — it’s also technique.

"He realized in the past that his footwork and his close-outs, the techniques he was using, the habits that he had were holding him back a little bit," Beilein said. "So he worked a lot, very hard on his close-outs, his posture, how he closed out and how he shuffled his feet."

Against Illinois, Hardaway will be called upon all game to slow down the lethal perimeter attack of Brandon Paul and DJ Richardson. However, Michigan can rest assured that if one of them gets hot, Hardaway won’t hesitate to see it as a challenge  to cool them down — after all, it’s what he’s been doing in practice all season long.

"What we saw as the year went on in this preseason, him embracing ideas and also saying, when he saw someone getting hot in practice, going, ‘wait coach I’m gonna take him,’" Beilein said. "That leadership thing where he wanted to be more of a factor defensively."

First-year Illinois coach John Groce is well aware of the challenge that Michigan will bring before his team on Sunday.

"Obviously, they’re a load. They’re terrific at both ends of the floor," Groce said during a press conference on Friday. "They’ve got great personnel, they’re really well-coached, they don’t have a lot of weaknesses, and they’re a really good basketball team."

Groce coached against John Beilein and Michigan last season, when his Ohio Bobcats defeated the Wolverines in the first round of the NCAA Tournament. Groce said last year’s Michigan team and this year’s present different challenges, but both were tough.

"I think both teams are really good. There’s some similarities, as well. The freshman class has obviously been added," Groce said. "I thought that Novak and Stuart Douglass brought some experience and some different things to the table than some other guys bring. Last year’s team I thought was really really good, obviously they were co-champions of the Big Ten, and this year’s team is really really good as well."

For Groce, it appears the biggest challenge will be matching up with Trey Burke, for whom he had a unique description.

"You look at his assist-to-turnover ratio, it’s disgusting, in addition to the scoring that he brings to their team," Groce said.