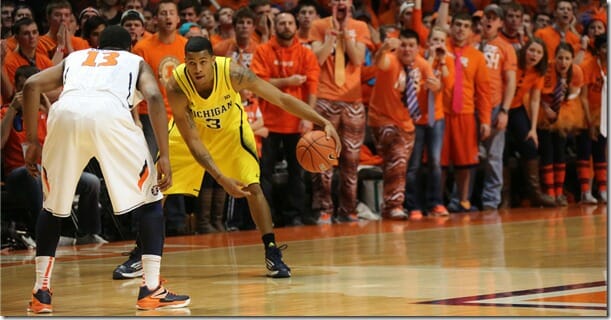 Michigan faced adversity in Champaign on Sunday evening but eventually the Wolverines proved too much for Illinois, prevailing with a 74-60 road win.

Jordan Morgan went down with an ankle sprain just two minutes after the opening tip off and Michigan was left to battle with its reserves in the front court. While Michigan’s other four starters stepped up, all reaching double figures, the backup big men impressed as well.  Mitch McGary, Jon Horford and Max Bielfeldt all rose to the occasion, stepping up to contribute a combined 17 points and 15 rebounds in 39 minutes.

Trey Burke didn’t have his best shooting night, finishing 7-of-19 from the field, but led all scorers with 19 points.

The win keeps Michigan at the top of the Big Ten standings, tied with Indiana at 6-1 – where the Wolverines will travel on Saturday – and in line for the No. 1 ranking in this week’s AP Poll.