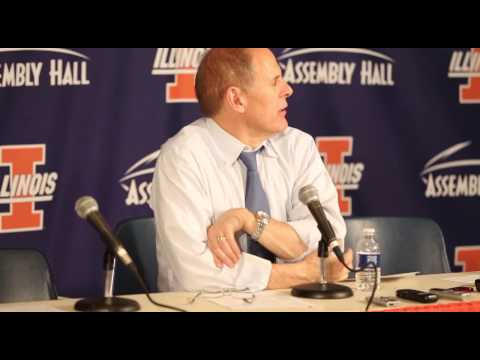 John Beilein faced the media after Michigan’s 14 point win at Illinois. Beilein addressed his team’s strong play, shared minor details on Jordan Morgan’s ankle sprain and gave his thoughts on a potential No. 1 ranking. Watch Beilein’s press conference in the embedded media player below or find selected quotes after the jump.


“I’m really pleased about that win. I think that Illinois really has great quickness, plays good defense. We are very fortunate that they dried up a little bit from three. I think we guarded them better once Richardson, Paul and even Abrams hit some pretty good threes against us. The big thing with us tonight was just hanging in there, taking care of the ball, not turning the ball over and making sure we get good shots. I was really pleased that we were able to do that. I loved how many young kids got out there and played with Jordan Morgan getting the ankle injury early, that gave three guys the opportunity to play that haven’t been getting as many minutes as they’d like. Really impressed with how our big men filled in there and then the other four perimeter guys played a good game. Both offensive and defensively, the numbers that Illinois hit had a lot to do with a great tough attitude by our defense.