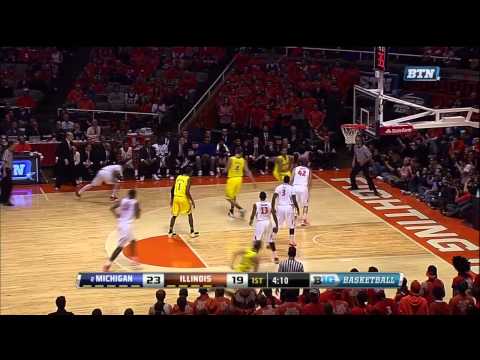 Robinson’s stat line against Illinois wasn’t the best he’s ever had, nor was it particularly eye-popping — 12 points on seven shots, seven rebounds (two offensive) and a steal — but the numbers don’t necessarily portray the impact he had on this game accurately. The freshman was all over the court cleaning up misses, playing excellent defense, taking good shots and playing an extremely smart game overall. Robinson makes the game look mighty easy, and he’s getting better and better as the season wears on. His back-to-back first half baskets were critical in stretching the game from a single possession difference to a more significant Michigan lead midway through the first half. The first play in this sequence shows Robinson’s pure, natural ability. His timing on his first step on the drive was perfect, as he only begins his drive when he maneuvers around Tyler Griffey — any earlier and it’s likely an offensive foul. Robinson sees a lane and uses his quickness to slice between two Illini defenders, somehow without drawing a charge. The finish was acrobatic and displayed excellent body control. On the second play of the sequence, Robinson simply flies in above Nnana Egwu and displays a deft touch on the putback. The Northwest Indiana native is now the 8th most efficient player in college basketball, using 17 percent of Michigan’s offensive possessions.

2) Trey Burke takes over late in the first half

With three and a half minutes left in the first half, Michigan had weathered some torrid outside shooting by Illinois and looked to be right with them going into the locker room. Then, like so many other games this season, Trey Burke happened. The guard didn’t play his best game — 19 points on 19 shots and an uncharacteristic three turnovers — but for this stretch of the contest he was completely unstoppable. Trey Burke scored seven of Michigan’s final 10 points before the half and assisted on the other three. He kicked things off by finally nailing a long 3-pointer; this was the only long-range make for Burke on the night. On the next play, Burke grabs one of his three steals on an excellent defensive play and finishes strong on the fast break. After a long rebound, Burke pushes the ball out ahead before dropping it off to Tim Hardaway Jr. beyond the arc for the transition 3-pointer. On the last play before halftime, Burke goes one-on-one against Tracy Abrams and schools him. Burke creates space with the fake drive, steps back, and buries the hotly-contested shot. It was the best possible way for Michigan to go into the break and gave the Wolverines all the momentum as they stretched their lead from three points to eight in the final three and a half minutes.

There is only one word to describe how Max Bielfeldt looked on his first trip to the free throw line: shook. The redshirt freshman air-mailed the first free throw, then subsequently over-compensated on the second, missing it long. But Bielfeldt deserves credit for how he responded the next time he was fouled — on the very next possession. The Peoria, Ill. native stepped to the line and calmly knocked down both shots. Oddly enough, it seemed to be these free throws that were the catalysts for Michigan’s most significant run of the game. Michigan went on a 9-0 run that saw the lead balloon from four to 13, a lead Illinois never seriously challenged for the remainder of the game. This particular run saw a bunch of different contributors. Bielfeldt was one-third of the stellar big man trio that came off Michigan’s bench after Jordan Morgan went down early in the game with an ankle sprain, and he made an excellent play by stripping the ball from two Illini defenders and finishing with a layup. Trey Burke took the ball to the paint and rocketed a pass over to Nik Stauskas, who knocked down a corner 3. To cap off the run, Glenn Robinson III makes yet another heads-up play by stealing the ball and dishing to a streaking Burke, who finishes strong at the rim. This run illustrates just how dangerous Michigan is — anyone on the court can make a play at any time. It’s tough to find a team with as many all-around weapons as the Wolverines have.

4) Michigan silences Illinois run out of a timeout

If Illinois was going to make this game close, it was probably at this point. The Illini had cut the lead to seven points after a 3-pointer by DJ Richardson, a turnover by Tim Hardaway Jr. and a jumpshot by Joseph Bertrand. John Beilein called a timeout, and it turned out to be a very smart move. When play began again, Michigan got back to business. While I’m positive the long fadeaway Burke shot was not the play Beilein called on the bench, the coach had to love the way Mitch McGary established position under the basket, followed the shot and tipped it in with his off hand. McGary was another of the three-headed big man monster Michigan trotted out against the Illini after losing Jordan Morgan. The freshman came up big in his 16 minutes, grabbing eight rebounds, four offensive, to go along with six points. On the ensuing Illinois possession after McGary’s tip-in, Trey Burke displays excellent on-ball defense, picking Brandon Paul’s pocket clean and taking it the length of the court for a two-handed dunk. These two plays couldn’t have come at a better time for the Wolverines — they brought the lead back up to 11 and completely took the air out of Illinois’ tires. From this point in the game, Michigan was able to go into cruise control.

There weren’t too many points during this game when Michigan’s offense looked prettier than in the latter portion of the second half. Open shots turned up all over the court for the Wolverines — part of that was certainly due to porous Illinois defense (the Illini are the third worst defensive team in the Big Ten), but most of it was Michigan players finding each other in great position to score. Tim Hardaway Jr. has vastly improved in nearly every aspect of his game this year, but one of the most noticeable is the improvement in his passing. On the first play in this sequence, Hardaway drives to the basket but pulls up and finds Glenn Robinson III cutting back door. Hardaway whips the pass to Robinson, who finishes with the easy reverse. Less than a minute later, Hardaway fakes a shot at the top of the key, drawing the attention of both his own defender and Jon Horford’s. The junior dumps the ball to Horford at the top of his jump, and Horford gets fouled going to the rim. Later, Trey Burke throws a perfect dart to Horford rolling off the pick-and-roll, hitting him in stride and allowing him to finish with the reverse. In the end, Burke reminds us that he’s capable of scoring on his own, catching the ball with four seconds on the shot clock near midcourt before driving all the way to the basket and hitting a runner to ice the game once and for all. This sequence demonstrates not only the myriad of kinds of movement Michigan employs in its offense, but also the command with which the players execute said offense. Michigan’s offense is a joy to watch because every player on the floor is just as likely to make a play for themselves or a teammate at any given moment. When everyone is moving and cutting and on the same page, as they were on Sunday, Michigan is almost impossible to stop.