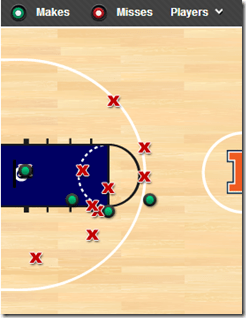 Those young Wolverines continued to look poised beyond their years in Champaign, Illinois on Sunday evening in the face of adversity. Michigan lost Jordan Morgan, its starting big man and oldest rotational player, to a sprained ankle just two minutes after the jump ball but showed no signs of panic. Instead the Wolverines took the loss in stride, weathering a hot Illinois shooting start to build a first half lead and carry it to a comfortable 14 point victory.

Michigan leaned on its bench, looking to Mitch McGary, Max Bielfeldt and Jon Horford to anchor the middle. That’s a true freshman, red-shirt freshman and oft-injured big man with 10 minutes of playing time since dislocating his knee cap in mid-December if you happen to be keeping score. The trio was up to the challenge, finishing with a combined 17 points and 14 rebounds in relief duty.

Michigan’s bench heroes had plenty of help as its other stars were up to the task. Trey Burke added 19 points, five assists, five rebounds and three steals while Nik Stauskas (14), Tim Hardaway Jr. (12) and Glenn Robinson III (12) all reached double figures with a combined 70 percent effective field goal percentage.

The 14 point win was routine by any measure and means Michigan is on the verge of securing its first No. 1 ranking in two decades – when four of those young Wolverines weren’t even born.

This wasn’t close to being one of Michigan’s better offensive performances this season, but for an average night it wasn’t bad at all. The Wolverines scored 1.14 points per possession in an offensive effort that was fueled in the paint and in transition. Michigan scored 42 points in the paint and 10 points on the fast break. The Wolverines made 53 percent of their twos and a third of their threes for a 57 percent effective field goal shooting percentage. We’ve entered an era of Michigan basketball where the Wolverines can attempt just 25 percent of their field goals from three point range and it doesn’t even seem out of the ordinary. Michigan continued to be aggressive on the offensive glass as well, rebounding 38 of its misses for 12 second chance points. This offense has played one bad game in 20 tries and isn’t showing any signs of slowing down nearing the midway point in conference play.

For the sixth time in seven Big Ten games, Michigan’s defense held its opposition below the one point per possession threshold. The Illini were able to run and gun with Michigan for about 15 minutes but eventually the three point well dried up and the Illinois offense couldn’t produce. The Illini hit five of their first 14 three point attempts but connected on just one of their final 13 attempts. Michigan’s defensive rebounding was underwhelming, surrendering offensive rebounds on 43 percent of Illinois’ missed shots leading to 20 second chance points. Michigan was able to force turnovers on nearly a quarter of Illini possessions and turned those turnovers into 22 points. Michigan also held Illinois to subpar two and three point shooting numbers: 47% and 24% for a 43% effective field goal percentage.

Michigan’s supporting big men played well in Jordan Morgan’s absence but losing Morgan for any extended stretch could still be a tough loss. (Beilein’s report is that the ankle is sprained and Morgan couldn’t put weight on it.) Morgan is the most consistent interior defender and rebounder on the roster and the best option to deal with opposing big men that run the floor extremely well – such as Cody Zeller next weekend. Michigan’s backups are able but unproven and there’s certain be ups and downs along the way if Morgan’s injury proves severe.

Number one in the country or not, this win ties Michigan at the top of the Big Ten standings with Indiana. It’s also the best start in Michigan’s program history. If both teams hold serve this week – Michigan against Northwestern and Indiana at Purdue – the showdown in Bloomington on Saturday night will be special to say the least.