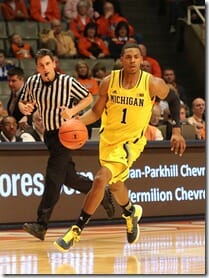 For the first time since the Fab Five wore maize and blue uniforms, Michigan is the No. 1 team in the country.

After occupying spots two through five this season, the Wolverines finally moved to No. 1 in the Associated Press Top 25 released this afternoon after a school-record 19-1 start. The Wolverines earned 51 first place votes ahead of Kansas with 13 and Florida with one.

Michigan is the only team in the country to be ranked in the top five in all 14 polls released this season. The last time the Wolverines were ranked No. 1 in the country was in November of 1992, the start of the Fab Five’s sophomore season.

Michigan head coach John Beilein continued to downplay the No. 1 ranking, and polls in general, but recognizes the importance for his fan base.

“It’s January 27th  and not one of you in here can remember who was No. 1 last January 27th,” Beilein explained on Sunday evening. “To our team that doesn’t make a big difference. I’m sure to our fans, and water coolers and coffee shops and people that love Michigan and hate Michigan that’s probably something they hate or they love right now. Our big thing is let’s keeping getting better every day while we focus on a Big Ten Championship.”