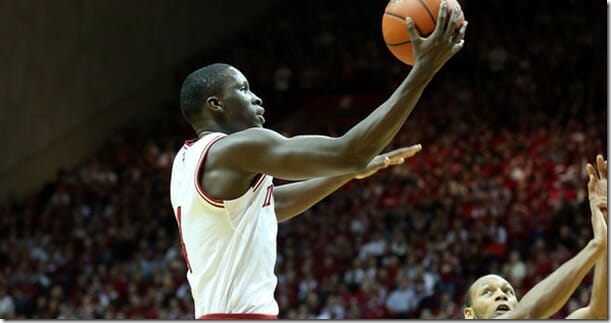 The records are slowly but converging around the efficiency margins as Michigan and Indiana are now both at the head of the pack in both record and margin. Michigan’s efficiency margin is a tenth of a point better than Indiana’s, that .10 differential is larger than the difference between second place Indiana and sixth place Minnesota. The Wolverines are No. 1 in the country and judging by their play in the Big Ten, they deserve it.

Michigan State’s propensity to play close games comes to light in the efficiency margin column as the Spartans have only outscored league foes by a hair more than Minnesota, who sits at 3-4. Michigan State is solid but unspectacular across the board, playing above average offense and defense, but the Spartans are bookended by teams defined by extremes. Ohio State and Wisconsin both play the best defense in the league but struggle to score points consistently. Meanwhile Minnesota can score the ball was effectively as anyone but Michigan yet gives up points almost as rapidly as Illinois, the Gophers recent slide has been triggered by rapid offensive regression and a lack of defensive improvement.

If you are looking for a team to “buy low” in the Big Ten, it still has to be Iowa despite some painful missed opportunities in early Big Ten action. Iowa has been outscored by .05 points per possession but has already played the five best teams in the league once and only has two games remaining against that top five group.

This game was one of the most aesthetically pleasing Big Ten games of the young season. Both teams got up and down the floor, pushing the tempo and making plays. There were numerous stars on both ends of the floor including Gary Harris and Adreian Payne for Michigan State. Harris knocked down five triples in his return to his home state while Payne provided everything from reverse alley oops, to critical rebounds to three triples of his own. Don’t look now but Payne is growing as a perimeter shooter, making six of his last seven three point attempts after making just one in his first two seasons in East Lansing. Despite Michigan State connecting on 11-of-23 triples, Indiana had too many scoring options and the Spartans just couldn’t keep up. The Hoosiers turned Spartan turnovers into easy offense and were always one step ahead before a late charge drawn by Cody Zeller iced the game for Indiana.

Oladipo deserves significantly more player of the year buzz. Not just in the Big Ten but in the country. There are few players in the country that affect the game in as many ways as Oladipo. He was a one man ball of destruction against Michigan State, wreaking havoc on both ends of the floor. Oladipo doesn’t just shut down opposing scorers defensively, he creates Hoosier offense by forcing turnovers. Oladipo’s improvement over three seasons is as impressive as anyone in college basketball and he appears to be trending toward lottery pick status.

Disappointment of the Week: Minnesota

Minnesota went 0-2 on the week to stretch its losing streak to four games after starting the season 15-1. Yes, road games are tough in the Big Ten but the Gophers desperately needed a win to get back on track and there aren’t a lot of better road opportunities than playing at Northwestern. The culprit for Minnesota’s struggle this week was the exact opposite of its first two road losses: offense. The Gophers scored just 92 points on 108 possessions, or just .85 points per trip. That’s awful offensive output by any measure but it is dreadful when compared to the sterling 1.16 points per trip that Minnesota averaged in its first five games.

Surprise of the Week: Purdue holding on against Iowa

Winning a home game over Iowa isn’t any major surprise as the Hawkeyes are just 1-3 away from home, but Purdue’s start to Big Ten play has been encouraging. The Boilers are overachieving at 4-3 despite being outscored by .02 points per possession in league play. This isn’t a vintage Purdue team but I’m not sure that anyone wants to play in West Lafayette right now. The Boilermakers have been excellent at defending twos, allowing Big Ten foes to shoot just 39.7% from inside the three point line, and have managed to scrap out victories. Purdue will have a shot at its in-state rival on its home floor as Indiana comes to town on Wednesday evening – a game that the Hoosiers should win easily on paper but could also be a building block for a turnaround Purdue season.

Mitch McGary has been an energy inducing backup while Jon Horford and Max Bielfeldt have played spot minutes at best. The trio of reserve bigs were thrown into the fire on Sunday evening in Champaign as Jordan Morgan went down with a sprained ankle. All three players answered the call, combining for 17 points and 14 rebounds up front.  Michigan’s front court has been undeniably crowded with Jordan Morgan’s experience and Mitch McGary’s potential clogging the way. If Morgan is out for any sort of extended time, this could be a valuable opportunity for all three players to gain important game experience.

This could very well be the game of the year – at least until these two teams meet again at the end of the season in Ann Arbor. Pitting No. 1 Michigan against No. 3 Indiana, this is a game that will go a long way toward defining the conference title race over the next two months. Both teams are well ahead of the pack in terms of efficiency margin and looked to be the league’s best teams. The Wolverine freshmen haven’t seen anything like Assembly Hall in their young careers and the hallowed Midwestern basketball turf will be a rare form with ESPN’s College Game Day stationed in Bloomington. Both teams play some of the best offense in the country and could put up points in a hurry. While the Hoosiers thrive off of forcing turnovers, Michigan values the basketball as well as anyone and something has to give.