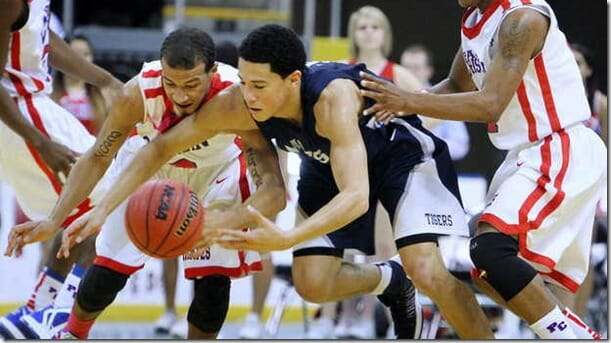 Irvin scored 26 points on 11-of-19 shooting with 11 rebounds, five assists, five steals and two blocks in a 64-52 win over McCutcheon. The very next day, Irvin stole the show against Arsenal Tech and top-15 class of 2014 recruit Trey Lyles. Irvin finished with 30 points (26 in the second half), 10 rebounds and two assists in a 64-59 win. Hamilton Southeastern entered the game ranked third in the state and was able to knock off the state’s top ranked team in Arsenal Tech.

You can watch the full HSE-Tech game here.

Notes and tidbits on Michigan’s other recruits and targets after the jump including one top 50 class of 2014 recruit who cut his list.

Donnal had 21 points in a 66-47 win over Northview and stats were not available for Anthony Wayne’s 44-37 win over Napoleon.

Booker led all scorers with 22, including 12 points in three minutes time in the fourth quarter, but Moss Point lost to Gautier 48-44. Booker bounced back with 17 points including the game winner – a tip in of his own miss – in a 37-35 win over Pass Christian.

“That’s a Devin Booker play,” Moss Point coach Micoe Cotton said. “If anybody’s going to hit a last-second shot, you expect it to be him. I saw it all year last year.

“He did a great job, but the other kids stepped up and made some big plays, too.”

Vince Edwards had 16 points in a 64-45 loss to Fairfield. Here’s full video of the game.

Chatman, a top 50 recruit, trimmed his list to eight schools and Michigan made the cut along with Arizona, Connecticut, Georgetown, Louisville, Oregon, UCLA and Washington.

Sumner had nine points, seven assists and four rebounds in a 73-59 win over Inner City Baptist.

Jaksic scored 14 points and grabbed 12 rebounds in a win over Walled Lake Northern.

Wideman had 18 points and 13 rebounds for Lake Central in a 62-50 win over Chesterton.

Davis had 10 points and 16 assists in a 41 point win over Bay City Central.

Coleman was visiting Illinois for Michigan’s win at Assembly Hall on Sunday.

Barefield had 13 points in Centennial’s 72-66 win over Damien.

Ash tallied 22 points, seven rebounds and four assists in a win for St. Joseph’s after returning from a back injury. Watson had 10 points and six rebounds in a loss to  West Aurora

Brunson had 23 points and four steals against Mt. Prospect and 11 points in a win over Warren.

Jackson had 17 points and seven steals in a 69-28 win over Harper Woods.

Here’s footage of Jackson in action at the USA Basketball Developmental Camp (via Scout.com)

Winston had 24 points in a 91-82 win over Ann Arbor Gabriel Richard.