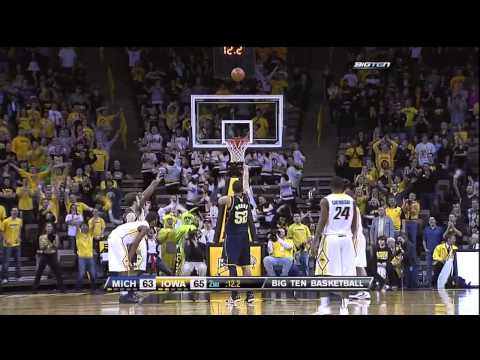 The only complaint any Michigan fan could lob against Trey Burke is that his consistently stellar play is becoming a tad monotonous (I didn’t say the complaint had to be reasonable). The point guard is shooting at a higher volume and has lost some of the efficiency on his jump shot. One reason for this is because many teams are replicating what Nebraska did by going under screens and daring Burke to shoot long 3-pointers; it’s risky because he can make them, but it just might be the best way to defend him.

If Trey Burke is getting slightly less efficient as the Big Ten season wears on, Tim Hardaway Jr. is progressing in the opposite direction. The junior has been unbelievably useful in every aspect of the game — he just does whatever Michigan needs from him. His scoring numbers from the past two games are eerily similar: 5-of-9 shooting in both contests, 13 and 12 points against Purdue and Illinois respectively. Hardaway has also continued his season-long trend of contributing in other areas; in those two games combined, he has notched seven rebounds, three assists, three blocks and four steals. Hardaway is shooting a Big Ten best 51.5% on three point attempts in league play.

Stacking statistics from two games on top of each other is fun; let’s do it for Glenn Robinson III. Over the past two games, Robinson has made 10 of his 14 shots for 24 points and grabbed 16 rebounds. Freshmen just don’t play much better than this guy. Robinson’s offensive rating in Big Ten games is an astounding 137, leagues ahead of the rest of the conference, as he uses 15 percent of Michigan’s possessions. Robinson makes big plays all over the court because of his insane athleticism and extremely high basketball IQ, which has only gotten higher as the season has progressed. Somehow, Robinson was cheated out of his flying block against Illinois, as it doesn’t show up in the box. This is a travesty.

Nik Stauskas is becoming an unfailingly consistent double-digit scorer for the Wolverines. The freshman has played in two games in which he failed to reach double digits: the first game of his career, against Slippery Rock, and against Ohio State. He scored 12 and 14 against Purdue and Illinois, respectively, shooting a combined 4-of-9 from beyond the arc — 44% would be a hot spell for many but it appears more like a shooting slump on the Canadian’s resume. Michigan’s coaches have been finding new ways to get him the ball in positions to score and he’s been taking advantage of opportunities around the basket.

Mitch McGary’s numbers don’t change very much from game to game — it’s the way he gets them that has Michigan fans excited about his progress as a player. McGary is undoubtedly expanding his game (he has unveiled a new mid-range jumpshot recently) and is converting a more consistent amount of his post touches through playing smarter and keeping the ball high. He still has his moments, though. The big man had eight rebounds against Illinois — along with four fouls.

Word on the street before the season began was that Jon Horford looked like one of the better big men on the team. He played well during the very beginning of the year, then went down with an injury. However, with Jordan Morgan out for at least a game and probably longer, Horfod’s health and subsequent production couldn’t have come at a better time. The redshirt sophomore was excellent against Illinois, scoring seven points and grabbing four rebounds in 17 minutes.

After sinking what were the most emotionally-resonant free throws for Michigan in recent memory (perhaps since Jordan Morgan in Iowa City?) against Illinois, The redshirt freshman continued to impress. After not playing against Purdue, Bielfeldt played like seasoned vet against Illinois, scoring four points and grabbing a couple rebounds in seven minutes.

Jordan Morgan had a solid game against Purdue, scoring six points and adding five rebounds, but we have to make the ever-popular decision of docking him points this week because he went down with an ankle sprain so early in the game against Illinois. Hopefully Morgan will return soon, but for now the Wolverines will have to get by on Jon Horford, Max Bielfeldt and Mitch McGary.

As was (somewhat) expected, LeVert’s playing time has been cut back now that we’re getting into the meat of the Big Ten season. LeVert has two points and three rebounds combined in his past two games, playing eight minutes in each.

Spike Albrecht has also had trouble finding playing time. He failed to record a point in either of the past two games and played just four minutes against Illinois.