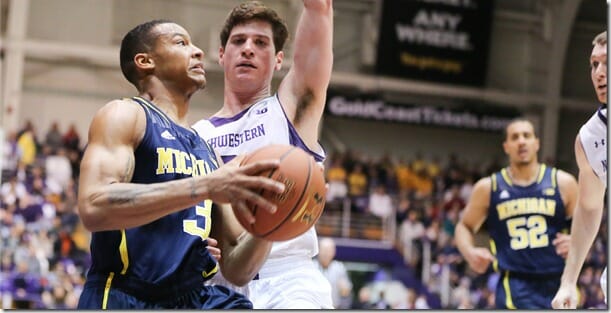 Michigan opened Big Ten play with an emphatic and unrelenting 28 point victory in Evanston, Ill. The Wolverines trounced on a Northwestern team playing without its best player, Reggie Hearn, who was sidelined with an ankle injury. When the final horn sounded, Michigan had scored 1.36 points per possession and John Beilein sounded nearly apologetic in his post game press conference.

Since then, Michigan has continued to prove that it’s the team everyone thought while Northwestern has steadily improved since starting conference play from rock bottom. The Wildcats have wins at Penn State, at Illinois and over Minnesota since that game but still sit at 3-5 in league play after a 15 point road loss at Nebraska. Despite some recent improvement, this is a Wildcat team fighting to stay above water rather than for its first NCAA tournament bid.

Bill Carmody’s teams have never been great on the defensive end of the floor, but his better teams can score the ball consistently. The 2012-13 Wildcats can’t. The graduation of seniors John Shurna and Juice Thompson and the early season ending injury to Drew Crawford have suffocated a struggling Northwestern offense. Northwestern is scoring just .97 points per trip in league play and its only real success offensively has been getting to the charity stripe, with 44 free throws attempted for every 100 field goal attempts. As you would expect from a Carmody coached squad, the Wildcats rebound just 24 percent of their missed shots and 45 percent of their field goals originate behind the three point line. However, unlike a typical Carmody squad, the lineup isn’t stacked with accurate three point shooters and Northwestern is shooting just 32 percent on triples in league games.

Michigan put on an offensive clinic in Evanston and defense has been a concern all season long for Bill Carmody. Northwestern has defended in its three Big Ten wins, holding Penn State, Illinois and Minnesota to under 1 point per possession. However, in Big Ten losses opponents are scoring a sizzling 1.18 points per trip. Northwestern’s defense ranks 11th among Big Ten teams and the Wildcats struggle in a majority of the four factors: 8th in effective field goal percentage allowed, 12th in defensive rebounding and 10th in free throw rate allowed. The Wildcats are forcing turnovers once in every five Big Ten possessions (3rd B1G) but the bulk of of that impressive number stems from games against two of the sloppier teams in the league, Illinois and Minnesota.

The notable addition from the first meeting is Wildcat leading scorer Reggie Hearn. Hearn averages 14 points and four rebounds per game and does so efficiently, hitting 57% of his twos and 37% of his threes. His reinsertion into the Northwestern lineup should make a significant improvement for a Northwestern offense that managed .96 points per trip in the first meeting. However, the former walk on isn’t good enough to single handedly swing the game.

Louisville transfer Jared Swopshire was a thorn in Michigan’s side in the first meeting, knocking down three triples, and proving difficult for Glenn Robinson III to keep track of. Swopshire continues to grow into his role as a versatile stretch four and he’s gaining confidence by the game. Averaging 11 points per game in league play, Swopshire is capable shooter from three point range (40% B1G) and is also grabbing almost eight rebounds per game in Big Ten play.

Dave Sobolewski is a solid Big Ten point guard. He’s played a ton of minutes early in his career, gets to the free throw line, is a consistent three point shooter and an above average setup man that doesn’t turn the ball over. He’s also no match for Trey Burke. Burke shredded Northwestern in Evanston, scoring 23 points and handing out five assists, essentially putting the game to bed before it even started. Tre Demps has stepped into the Wildcat starting lineup to hopefully bolster the backcourt. Demps’s introduction to the starting lineup hasn’t necessarily yielded results: he went 4-17 from the field in his two starts.

Alex Olah anchors the middle and the big man was very involved against Michigan last time, hitting a couple early shots in the post and handing out five assists, but also turning the ball over five times. Olah is an underwhelming rebounder and is shooting just 32 percent from the field in Big Ten games, averaging under four points per game.

Alex Marcotullio and Kale Abrahamson differ in stature, Abrahamson is 6-7, 175 pounds while Marcotullio checks in at 6-3, 195 pounds, but both live and die with the three point shot. Despite attempting 91% of his Big Ten field goals from three point range, Marcotullio is shooting just 27 percent on triples in league games. Abrahamson has found a little more luck, connecting at a 43 percent clip.

Michigan could very well be without Jordan Morgan, who remains sidelined with an ankle injury, tonight. Morgan is a significant loss but his absence should provide a valuable opportunity for Mitch McGary, Jon Horford and Max Bielfeldt to earn quality playing time. All three players have likely played fewer minutes than they deserve – some due to injury – but could prove invaluable as the season wears on. Given Northwestern’s weakness in the post, Michigan will need its backup big men not just to hold the tide but to make an impact on both ends of the floor.

Northwestern is a better team with Reggie Hearn but the Wildcats still shouldn’t be able to slow down Michigan. Looking across the board, there isn’t a match-up advantage to be had for Bill Carmody and Michigan has already proven more than capable of picking apart Northwestern’s weaknesses. The Wolverines have too many options across the board and there’s no reason to suspect that the Wolverines won’t be able to rebound 40 percent of their misses while dictacting the tempo once again. Ken Pomeroy projects a 19 point Michigan win, giving the Wildcats just a 5 percent chance of an upset at the Crisler Center.

Recruiting Note: 2014 guard AJ Turner plans to visit Michigan for tonight’s game. Turner spoke with John Beilein on Tuesday evening and has been an evaluation focus for the Michigan staff.