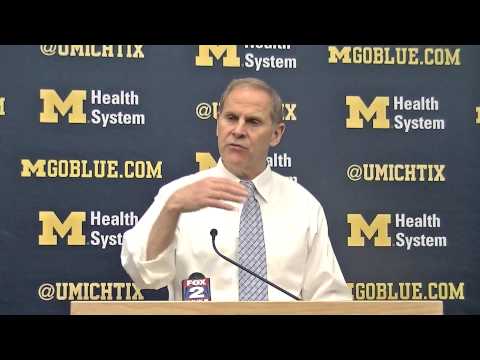 John Beilein spoke with the media during a post-game press conference after his team’s 68-46 victory over Northwestern on Wednesday. You can watch the full press conference using the embedded media player below, or read selected notes and quotes after the jump.


Opening statement: “I tested this out with Tom Wywrot already. My birthday’s coming up pretty soon, and we’ve played Northwestern 12 times. I’m going to be 60 soon. I’m going to celebrate it as my 72nd birthday because they’ve aged me 12 years. Getting ready for them is incredible. It is a tremendous challenge for our team to just get ready for this game. I’m so proud of our guys, the way that they guarded them, because that team is developing … right in front of your eyes. From where we saw them just a month ago, they’re going to get better and better, evidenced by their wins against Minnesota and at Illinois. I feel relieved right now, because those two days after our Sunday night, getting ready and then today, was difficult for our team, difficult for our coaching staff. I’m really pleased to get that W today.”