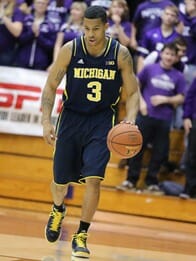 In a season that has seen some outstanding point guard play, Burke is clearly the best all-around player at his position in college basketball. Averaging 18 points per game, he has been in double figures in every game. And in addition to averaging seven assists per game, he has a very impressive 3.7-1 assist-to-turnover ratio.

John Beilein has always been a gifted offensive coach who can scheme X’s and O’s with the best of them. But when it comes to Burke, he has applied a “less is more” approach by allowing him to use his offensive gifts in transition and ball-screen isolation plays. The 6-foot sophomore from Columbus, Ohio has responded with a remarkably efficient season so far and is arguably the most important reason the Wolverines are No. 1 in the country.