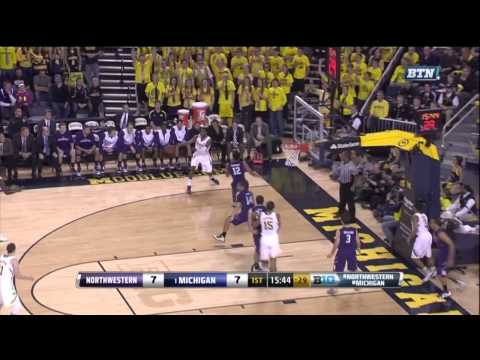 This play is a great reminder for exactly why Northwestern played this game at a pace aptly described characterized on Basketball State as “excruciating.”   Michigan can hurt you many different ways offensively, but its most lethal weapon is its transition game. Even when the game was played at snail’s pace, the Wolverines still torched the Wildcats, which goes to show how accurate the “pick your poison” cliché is in terms of Michigan’s offensive attack. This particular play was interesting because even though it didn’t end up looking like a fast-break basket, and probably wasn’t counted as such, that’s exactly what it was. Trey Burke, who played the role of aggressor expertly throughout the game, pushes the ball up court even though Northwestern does a good job of sending guys back on defense; he’s effectively going four-on-four. But Burke is so good at getting to the rim that he doesn’t really need numbers — he simply blows by Dave Sobolewski and attracts the attention of Mike Turner, along with the rest of Northwestern’s defense. Every single Northwestern player has their eyes on Burke as he drives to the basket. A lesser player would have gone up with the ball and probably gotten fouled, which is still an excellent result of a possession. Burke, however, makes the difficult pass while airborne along the baseline to Glenn Robinson III, which catches Northwestern out of position from the very start of this defensive rotation. Here is where we see exactly what makes Michigan’s offense so deadly. Robinson has a shot if he wants it, but he’s both smart enough and unselfish enough to give up the ball to Tim Hardaway Jr. Hardaway also has a shot, an even better look, but he doesn’t even hesitate before making the extra pass to Nik Stauskas, who buries the wide open 3-pointer. When Michigan is passing up good shots for better shots, it means its offense is clicking, which is bad news for the opposing team.

Mitch being Mitch. These are just the kinds of plays Mitch McGary provides when he’s on the floor — the freshman never, ever gives up on a ball and will do whatever he can to insure an extra possession from his team. McGary was very good as one half of the big man duo replacing Jordan Morgan, along with Jon Horford. He grabbed 11 rebounds (three offensive), but this one was his most flashy. McGary saves the ball as it’s going out of bounds and tips it behind his back to Nik Stauskas, who secures the ball and kicks it back to Trey Burke. Offensive rebounds often have a similar effect to a fast break, in that the defense is often not set and sometimes confused. That’s exactly what happens on this play, as Northwestern simply loses track of Tim Hardaway Jr. After Burke makes a move to the inside, he kicks the ball to Hardaway, who is wide open at the three point line. Hardaway buries the long ball. What McGary gives Michigan is the ability to instantly swing momentum in favor of the Wolverines. He’s such an emotional player, and the fans feed off his energy so readily, that a play like this can really change the tide of a game. Michigan wasn’t in any real danger of losing this contest, but Michigan held just an eight-point lead at this point. Immediately following McGary’s save, the Wolverines went on an 8-0 run and saw their lead balloon to 16.

3) Michigan plays great half-court defense in the first half

The number one criticism of Michigan this season has been its defense — it’s been good but not great. While Northwestern isn’t exactly an offensive juggernaut, Michigan displayed some hard-nosed, grind-it-out half-court defense that completely stymied the Wildcats at different points in the game. There were three instances in the first half where Michigan forced Northwestern into shot-clock violations (or near shot-clock violations). The Wolverines’ defense of choice is obviously man-to-man, and it’s easy to see why — the athletes Michigan has on the court at any given time are versatile enough to safely switch when needed and can guard a wide array of players. Glenn Robinson III may be Michigan’s most versatile defensive player, as he has the quickness to guard a wing and the size and strength to guard a big; Mitch McGary and Jon Horford are both very mobile and athletic and able to help out on the wing as well; Tim Hardaway Jr. and Nik Stauskas also have a good combination of length, quickness and bulk. This comes in handy in certain defensive situations. Notice that when Northwestern’s 5-man sets a screen for a guard, McGary or Horford can come out and challenge the ball handler hard knowing that Glenn Robinson III is the player helping on the screener. This sequence shows Michigan playing great team defense, but highlights much improved one-on-one defense, as well. On the third play, Stauskas positively suffocates Tre Demps and causes him to turn the ball over as the clock is running out.

Jon Horford had one of the best games of his career on Wednesday — the forward scored 10 points on five shots, grabbed seven rebounds and blocked three shots. John Beilein had seen enough out of Horford in practice to give him the start, and the Grand Ledge native took full advantage. What this series of plays shows more than anything is Horford’s surprising offensive versatility. In the first play of this sequence, Horford shows off excellent footwork against the taller Alex Olah in the post. He faces the big man up, turns, makes a great spin move and pivots up and around Olah for the two-pointer. Michigan fans have not seen this sort of footwork from their big men often and if Horford can be consistent with moves like this, his post touches will only increase. On the second play, Horford makes a great roll to the basket after setting a screen for Nik Stauskas. Stauskas makes a difficult pass through two defenders, hits Horford on his way to the hoop and Horford finishes with the reverse. On the last play, we see Horford flashing to the block and getting fouled. The ease with which the redshirt sophomore integrated himself into Michigan’s offense against Northwestern is a testament to his practice experience despite not getting much game playing time because of injuries. Horford has a better grasp of the offense than McGary or Max Bielfeldt, and it showed on Wednesday.

It’s hard to overstate how quickly a game can get out of hand when Michigan’s offense gets rolling. The Wolverines have simply overwhelmed many of their opponents offensively, and they have now done just that to Northwestern — twice. This game was never in doubt, but the Wildcats cut the lead to 10 with about 12 minutes to go in the game. But even if Northwestern saw even the slightest of opportunities to make the game interesting, Michigan shut the door in its face. Trey Burke does what he usually does when Michigan needs some offense — take the ball to the hoop to get either a layup or free throws. In this instance, Burke gets sent to the line and nails both free throws. On the next play, Nik Stauskas shows exactly how dangerous he can be off the dribble. Kyle Abrahamson makes a dreadful close-out and Stauskas makes him pay — the freshman drives left and slams home a two-handed dunk. Stauskas had some difficulties finishing Wednesday but on this drive he left no doubt. Later, Trey Burke finds a rolling Jon Horford when Alex Olah takes an eternity to find his man after hedging on Burke. Horford goes up strong against two Northwestern bigs and cashes the and-1. From this point on, Michigan cruised to an easy victory. With the Wildcats taken care of in particularly dismissive fashion, the Wolverines can finally turn their full attention to Indiana on Saturday.