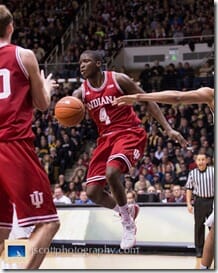 There is a big game Saturday and one preview isn’t enough. Here’s a first look at Indiana featuring some random statistical insights derived from Ken Pomeroy’s wealth of numbers and Synergy Sports.

Michigan vs. Indiana isn’t just fascinating because it’s the highest ranked game ever played at Assembly Hall or because it features two of the three most efficient offenses in the country. This is a match-up that is intriguing because while both offenses are great, they are also very different. Michigan and Indiana’s strengths both directly counteract the opposition’s.

Three statistics stand out as not only Indiana strengths, but elements that are vital to keeping the Hoosier offensive machine running smoothly. Those three keys are:

Apt Wolverine fans will recognize that Michigan is a team that has made it’s mark by not turning the ball over, fouling or surrendering many offensive rebounds.

Only Wisconsin (the only team to win at Indiana this year) turns the ball over less often than Michigan. Nobody in the country fouls less than the Wolverines and John Beilein’s team is one of the top 15 defensive rebounding teams in the country.

Indiana excels in all three facets. The Hoosiers force turnovers and shoot free throws more often than any other Big Ten team and only Minnesota grabs more offensive rebounds. Ken Pomeroy’s Game Plan feature calculates the correlation between each of the four factors and a team’s offensive and defensive efficiency. Other than shooting (which is important to every offense), offensive rebounding and defensive turnover percentage jump off the page in importance.

Offensive rebounding is nearly as important as shooting while forced turnover percentage is more important than any other factors for Indiana’s offense. Having a defensive statistic so closely correlated to offensive production is rare but that’s because the Hoosiers are so effective in converting turnovers to points. Indiana averages over 16 points per game off of turnovers, 19 at home, in Big Ten play. It shouldn’t be surprising that Wisconsin, the only team to beat the Hoosiers in Assembly Hall, surrendered only seven points off of turnovers in their upset victory.

These three statistics will serve as a bellwether in Saturday night’s game. If you can only look at three statistics on the box score, these three are likely to tell the story by 11 p.m. on Saturday. If Indiana has its way on the glass and forces Michigan turnovers, it’s tough to see the Wolverines walking out of Assembly Hall with a win.

This is probably the most encouraging statistic of all for John Beilein and his staff: Indiana doesn’t defend ball screens very well.

The Hoosiers rank in just the16th percentile nationally while defending pick and roll ball handlers. Michigan happens to have one of the best ball screen offenses in the country including the two best ball screen scorers in the league. Here’s a look at Indiana’s per-possession defensive effectiveness in ball screen scenarios:

Michigan’s attack features the top two ball screen scorers in the conference and the Hoosiers have a more challenging time defending the ball handler than the roll man. That news should have Trey Burke and Nik Stauskas’s eyes lighting up entering Saturday’s game.

Indiana’s a good defensive team but Michigan has the weapons and mentality to exploit one of its primary defensive weaknesses.

How does Indiana deploy Victor Oladipo?
Victor Oladipo is the key for the Hoosiers defensive. The 6-foot-5 chaos inducing wing is one of the best defensive players in the league. Oladipo creates offense with his defense and is capable of negating great offensive players. The key in Saturday’s game will be where Tom Crean decides to use Oladipo. Does he guard Trey Burke, Tim Hardaway Jr. or even Nik Stauskas.

Size wise, the natural match-up is Hardaway. Oladipo has made a living while shutting down wing scorers and Hardaway fits the bill. But I just don’t see how Oladipo can guard anyone other than Trey Burke. Burke makes everything go for Michigan and as Aaron Craft made abundantly clear, the only way to slowdown Michigan is to slow down Burke. Oladipo is the sort of defender good enough to eliminate Burke’s influence on the game, Michigan has yet to prove that it can win a game when that happens.

The problem with Oladipo guarding Burke is that it leaves 6-foot guards Jordan Hulls and Yogi Ferrell to guard Michigan’s 6-foot-6 wings, Tim Hardaway Jr. and Nik Stauskas. Those are both match-ups that should give Michigan a significant advantage. Hulls and Ferrell have started every game and are averaging just shy of 30 minutes per contest and the Wolverines will have to exploit both match-ups when the opportunity presents itself.

Crean has a couple options as protection. First, he can play Will Sheehey and Remy Abell for more minutes. Sheehey is averaging 21 minutes per Big Ten game while Abell plays 13 per game in league play. Both are critical options off of the bench and have more prototypical builds to guard Hardaway and Stauskas on the wing.

Indiana has also utilized a zone defense somewhat often this season – on nearly once in every five possessions. The decision was criticized by many watching Indiana play Michigan State last weekend, as the Spartans connected on 11 of 23 long range efforts, but the numbers say that Indiana’s zone defense has been effective. The Hoosiers have played zone on roughly 19% of their defensive possessions this year and have actually played better defense in zone than in man-to man.

Indiana doesn’t force as many turnovers in the zone but has been more successful. As for Michigan, the Wolverines have been equally successful against both man and zone defenses in the half court offense.

Of course, if you go zone you risk letting Nik Stauskas get loose. Stauskas is scoring a ridiculous 1.54 points per possession against zone defense with an 81% effective field goal percentage. What zoning Michigan does accomplish is turning the Wolverines into a three point shooting team for better or worse.

I would expect a little bit of everything from zone defense to man-to-man and even full court press from Tom Crean on Saturday evening. If something is very successful, he’ll stick with that approach. Remember last year in Ann Arbor, Crean opted to guard Trey Burke with Christian Watford for long stretches of the second half. That approach is less likely this time around as Glenn Robinson III is a much more difficult defensive assignment at the four position than Zack Novak.

Fun and Gun?
As a basketball fan, watching the two best offenses run up the court in a 67 or 68 possession game could make for perfect prime time Saturday night television. But what is the best approach for either team?

Michigan’s offense has been more efficient when it pushes the tempo and consensus recipe for trying to beat the Wolverines has been slowing the game down. Conventional wisdom says pushing the pace is smart for the Wolverines.

However, running is in Indiana’s DNA and the Hoosiers want to run every time they take the floor. Indiana was trying so hard to run against Michigan State that it threw three or four outlet passes directly to Spartan defenders. The fact that Indiana runs off of made baskets, something Michigan never does, goes a long way toward explaining the philosophical differences of both teams. Michigan is lethal when it does run but that is partially because the Wolverines are so selective in choosing when to run – strictly off of clean rebounds and turnovers.

Indiana pushes the tempo because it knows nothing else. In Assembly Hall in front of an amped up crowd, Michigan needs to be careful. If it falls into a track meet with the Hoosiers, things could get out of hand quickly.

Looking back at Ken Pomeroy’s Game Plan figures, here’s the correlation between tempo and offensive and defensive efficiency for both squads.

As tempo increases, Michigan’s offense becomes radically more efficient but its defense regresses. Indiana’s offense takes a moderate step forward at a faster pace but its defense becomes significantly more effective. The snowball effect in Assembly Hall is a very real worry and it seems that Michigan – especially early on – would be smart to slow the game down early and prevent quick misses which can lead to easy Indiana makes.