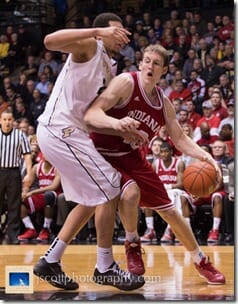 Everyone had this game circled on their calendars when schedules were announced in August but I’m not sure that anyone expected it to live up to this much hype. Even fewer people expected Michigan to be the No. 1 team in the country on February 2nd after Indiana opened the season at the top of the polls. As it is, No. 1 vs. No. 3 will be the highest ranked game ever played Assembly Hall history, topping another match-up between the same teams 20 years ago when No. 1 Indiana beat No. 4 Michigan by a score of 93-92.

We live in an era of college basketball where everyone wants to declare the regular season meaningless but this is as big is it gets in the college basketball world. College Game Day will be in Bloomington, tickets are being resold somewhere in the neighborhood of 600 to 1,000 dollars. It’s fair to say that Michigan hasn’t played in a college basketball game of this magnitude since the Fab Five lived in South Quad. Seeing the ranking next to Michigan’s name on a Monday afternoon is one thing but watching the Wolverines take the court as the No. 1 team at Assembly Hall is going to be something else. Michigan has played, and will play, challenging games this season but is unlikely to face a more difficult match-up before late March.

We’ve spent 1,000s of words raving about Michigan’s offense this season but Indiana’s is almost as good. The Hoosiers check in at 1.23 points per (adjusted) offensive possession compared to Michigan’s 1.25. Michigan is unlikely to face another offense — or team — as good as Indiana unless it reaches the Final Four. Indiana shoots the daylight out of the ball, making 54% of its twos and 42% of its threes for a 57% eFG% (4th nationally) but that’s just the start. The Hoosiers also feast on the offensive glass, rebounding 41% of their misses, and at the free throw line, shooting 49 free throws for every 100 field goal attempts. Indiana’s offense hasn’t slowed down in Big Ten play as the Hoosiers rank first or second in the league in shooting, offensive rebounding and free throw rate. The only weak spot of Indiana’s offense is the turnover. The Hoosiers have coughed the ball up once every five possessions in Big Ten games, fourth worst among Big Ten teams.

On the season, Indiana’s defense ranks 15th nationally by Ken Pomeroy. In Big Ten games, the Hoosiers have been about equal to Michigan: pretty good. The Hoosiers have surrendered .942 PPP in league games compared to Michigan’s .945 PPP. The teams check in as the third and fourth best defenses in the league respectively.

Indiana’s defense is aggressive, forcing more turnovers on 22 percent of its opponents’ possessions – more than any other Big Ten team. The Hoosiers are stout in the middle as opponents make 43% of their twos and overall surrender a 44% effective field goal percentage (3rd B1G). Where Indiana runs into some difficult is on the defensive glass. Big Ten opponents rebound nearly a third of their misses and the Hoosiers rank 8th in the conference in defensive rebounding.

Cody Zeller was just about everyone’s pick for Preseason Player of the Year and he’s been very good this season, even if he’s no longer the odds on favorite to take home the Wooden award. Pundits will cherry pick on the handful of subpar games or halves that Zeller has had this year against Wisconsin, Penn State or Michigan State but Zeller is still one of the best big men in the country. He makes 62 percent of his twos and gets to the free throw line more often than any Big Ten player other than Aaron White. Zeller does just about everything you want in a big man from rebounding on both ends to running the floor. The potential of Jordan Morgan missing Saturday’s game, combined with the fact that Zeller draws fouls at such a high rate, could be a serious problem for the Wolverines.

Indiana’s No. 2 scorer is a guy that was somewhat off the radar over the offseason but is now being discussed as a potential lottery pick, Victor Oladipo. Oladipo has been Mr. Everything for the Hoosiers. He’s a lethally efficient scorer, making 69% of his twos and 53% of his threes, but he makes an even great impact on the defensive end of the floor.

6-footers Kevin “Yogi” Ferrell and Jordan Hulls start in the backcourt. Hulls attempts 64% of his field goals from three point range and connects at a 48 percent clip. Leave him open and put three points on the board for the Hoosiers. Yogi is the star freshman of Indiana’s class and while his numbers don’t jump off the page, he’s a kid that always seems to make a big play. Ferrell is shooting 44% on twos, 33% on twos and is the leading assist man on the Indiana roster.

Christian Watford is a polarizing figure among Indiana fans as there always seems to be a hint of displeasure despite his productive career. Watford has become more efficient in every season at Indiana and he’s connecting on 48% of his threes this year. Yes, he’s not a good two point scorer (42%) or a terrific defender but he’s a versatile scorer that stretches the floor and gets to the line. Watford torched Michigan a season ago in Bloomington, scoring 25 points on 8-of-11 (3-4 3pt) shooting but Glenn Robinson III should have an easier time guarding him than Zack Novak.

Will Sheehey and Remy Abell play 22 and 15 minutes on the wing off the bench respectively but I suspect both players will surpass those averages against Michigan. Sheehey scored six points in a three game span in early mid-January but snapped out of it over the last three, scoring 27 in his last three games on 8-of-15 (5-6 3pt) shooting. Both players will come in handy for Indiana as the Hoosiers look to offset Michigan’s backcourt which features two 6-foot-6 wings.

The Assembly Hall factor can’t be overrated. It seems like every recent trip that Michigan has made to Bloomington has involved falling into a massive hole in the first half before a steady comeback effort. Watching Indiana play, that’s how most games at Assembly Hall end up. The Hoosiers are going to make an early run and Michigan is going to have to stand tough and weather it.  Two or three turnovers, quick shots or bad plays can change the whole game. As John Beilein puts it, Michigan needs to just hit singles rather than swinging for extra bases. Indiana’s offense is too potent and too quick to provide with any extra easy opportunities.

Something we’ve rarely said this season, Ken Pomeroy likes Indiana – by a fairly comfortable margin. Pomeroy’s projections give Indiana a 76-70 victory with just a 32% chance of Michigan pulling off the road upset. Despite the No. 1 ranking, the odds are against Michigan in this one. The Wolverines youth was apparent in their road trip to Ohio State earlier this season and Bloomington will provide another – more stringent – test of road composure for this young team.

This & That: College Game Day will be on-site in Bloomington and the festivities will begin Saturday morning at 10 a.m. on ESPNU before moving to ESPN at 11 a.m., there will also be GameDay programming on ESPN starting at 8 p.m. before the 9 p.m. tip off. Will Michigan wear new all-maize Adidas ‘Bleed Out’ jerseys that we dug up this summer? They are on sale but it remains to be seen if Michigan will wear the all maize uniforms in Bloomington. Michigan has partnered with SportStream to provide a second screen service during sporting events, check out a preview here.