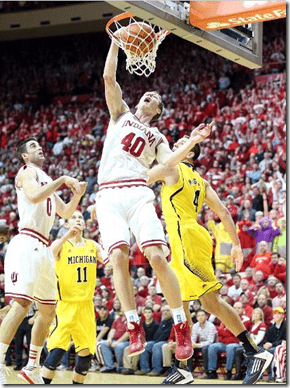 Michigan weathered the initial storm but that wasn’t enough. Indiana hit its first six shots of the game, four from behind the three point line, and blitzed the Wolverines out of the gate. Trailing 28-13 with Assembly Hall as loud as its been all season, Michigan was forced to battle back throughout the first half. They managed, trailing by just four at half time after Trey Burke hit a three pointer as time expired.

In the second half, Michigan opened strong to tie the game at 40-40 before the Hoosiers came alive with a 9-0 run to reestablish control. The Wolverines answered again, cutting the lead back to one possession late but Indiana had just enough answers to pull away down the stretch with a 81-73 win.