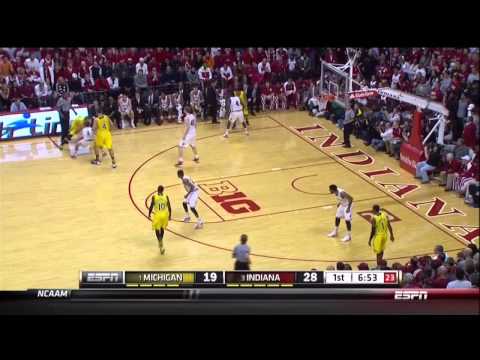 Michigan wasn’t prepared for the buzz saw atmosphere that awaited them at Assembly Hall on Saturday evening. Truthfully, I can’t think of a team that would have come out landing haymakers against the Hoosiers in that atmosphere. Indiana fed off of the energy from its rabid crowd from the opening tip, rushing out to a 15-point lead early. Michigan was hurting for some sort of coherent offensive attack and couldn’t seem to keep Indiana from knocking down 3-pointers on the other end. Then, the Wolverines responded. Michigan locked down on defense: holding Indiana scoreless for nearly five minutes after a Victor Oladipo layup at the 10:13 mark. This brief defensive wizardry allowed the Wolverines to cut into Indiana’s sizable lead. This 6-0 run occurred in a two-minute span from about 7:30 to 5:30, and it was one of the main reasons Michigan was able to keep it close throughout the first half. Staring down a blowout in Bloomington, Michigan responded with a few key plays. First, after Mitch McGary corrals a defensive rebound and gets the ball to Glenn Robinson III, Michigan is able to get on the fast break — Robinson finds Trey Burke on the right side for the easy lay-in. In the second play of the sequence, McGary sets a ball screen for Nik Stauskas. Cody Zeller helps, and Stauskas lobs the ball over Zeller to McGary before Indiana’s big man can recover. This was particularly interesting because it shows one thing Stauskas could do that Burke couldn’t: get the ball over Zeller when Indiana made Michigan’s offense a two-man game. This is mostly because Stauskas is 6-foot-6 and Burke is 6-foot, but it shows great vision from Stauskas. Michigan follows with an inbound dunk from Jon Horford, and just like that what was formerly a 15-point lead is cut to five and Michigan is right back in it.

Nearing the end of the first half, Michigan had to consider itself in pretty good shape. It had taken a big punch from Indiana but was resilient and fighting its way back. However, Michigan had missed three wide open looks from three point range down the stretch and a Cody Zeller dunk on Indiana’s final first half possession appeared to have returned the momentum to Indiana.

Then, Trey Burke stepped up as he has so often in his career. The point guard stared down Indiana’s Will Sheehey and called for an isolation. Burke did what he’s done so well — create the tiniest bit of space, just enough to have room to fire. Burke nailed the stepback 3-pointer over Sheehey’s outstretched hand, and all of a sudden Michigan was down four points to a team that shot 50 percent from the 3-point line in the first half. In the aftermath of this one, there have been questions about Burke resorting to “hero ball” late in the game. While he may have taken some ill-advised shots late, it was probably because, as we can see here, he is more than capable of making them.

3) Tim Hardaway Jr. knocks down a 3-pointer then draws a charge at the other end

Hardaway had an interesting game. It seemed that whenever Michigan needed a basket in the worst way, Hardaway came through for them and provided. Hardaway was effective, scoring 18 points on 16 shots, but he didn’t do much other than score — he ended up with just one rebound and a couple of turnovers. Part of this was due to the fact that Hardaway registered his third foul early in the second half and was forced to sit for a while. When Hardaway returned after his third foul he made an immediate impact. Fresh off the bench with Michigan down seven, Hardaway nailed a 3-pointer on the fast break to cut the lead down to four. On the other end of the floor, Hardaway makes a big play stepping up in front of Jordan Hulls, risking his fourth foul and drawing a charge. From this point, the game was within one or two possessions until Indiana was shooting free throws.

This is a point in the game where it seems like Michigan might have missed Jordan Morgan the most.  What made both of these plays happen was Michigan’s bigs — Glenn Robinson III in the first play, Mitch McGary in the second — helping on Victor Oladipo’s drive to the basket and failing to block out Cody Zeller. With those two preoccupied with blocking shots, no one got a body on Zeller, and he is simply too dangerous on the offensive glass to let that slide. What makes Jordan Morgan different than Robinson,  McGary or Jon Horford is that he is far more concerned with being in position to box out, rebound and take charges than blocking shots.

One other area that was lacking, to some extent in these plays but more so at the start of the game when Indiana got whatever it wanted in the paint, was defensive rotation. Morgan’s experience and on-court smarts are what drive those rotations for the bigs, and not having him in the game hurt. Again, this is not meant to take anything away from McGary or Horford, who provided Michigan with some great minutes. They just aren’t as experienced as he is and they do different things. There were a few instances in the game when it would have helped to have Morgan on the court, and these were two of them. These two dunks occurred within two minutes of each other, and the effect of each was devastating to Michigan’s momentum.

After a huge play by Trey Burke, a drive to the basket for an and-1, Michigan looked to be in business once again. The Wolverines were down just three points on the road and had already fought back twice just for the chance to hang around long enough to possibly steal one from the Hoosiers on Saturday. Then, Indiana effectively closed the door. John Beilein implemented the 1-3-1 during the defensive possession following Burke’s free throw, and the experiment failed. Despite two long Michigan defenders at the top of the zone — Nik Stauskas and Glenn Robinson III — Victor Oladipo dribbles through both of them. Christian Watford draws Mitch McGary to the free throw line, while Burke is forced to help on Oladipo. Oladipo passes to Jordan Hulls, probably the number-one player you don’t want to leave open at the 3-point line in a close game, and Hulls nails the deep ball. After this play, Michigan again cuts the lead to four on a McGary tip-in, but on Indiana’s ensuing offensive possession, Oladipo drives to the basket and receives the benefit of a truly puzzling foul call. The referees award Oladipo the continuation rather than just a foul on the floor as it appears it should have been called. Oladipo goes to the charity stripe and nails the free throw to extend Indiana’s lead to seven, and the Hoosiers never looked back.